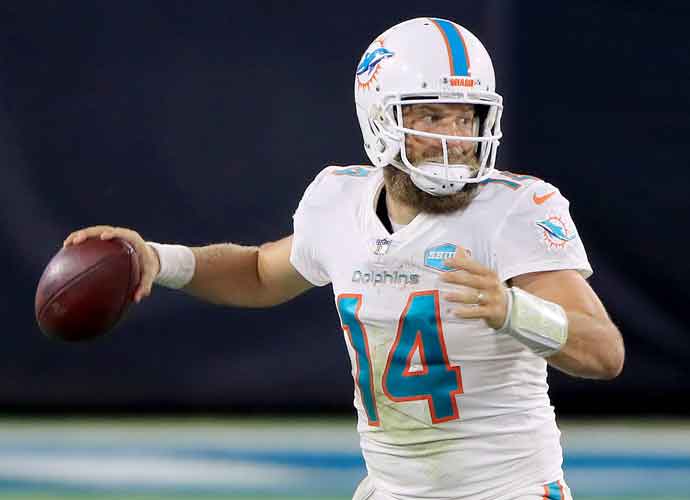 JACKSONVILLE, FLORIDA - SEPTEMBER 24: Ryan Fitzpatrick #14 of the Miami Dolphins attempts a pass during the game against the Jacksonville Jaguars at TIAA Bank Field on September 24, 2020 in Jacksonville, Florida.

Ryan Fitzpatrick is the greatest example of a feast or famine quarterback that we have seen in the NFL in a long time. His weeks one and three performances are the best examples of this. During the Dolphins week one matchup against the New England Patriots and their excellent secondary, Fitzpatrick threw three interceptions with his team scoring a total of 11 points. But Fitzmagic is always lurking.

Against the putrid Jacksonville Jaguars on Thursday night, Fitzpatrick lit up the field completing 18 passes on 20 attempts and having two touchdown passes. “Fitz is out of his mind,” tight end Mike Gesicki said. “He’s (37) and playing like he’s 23. You see the fun he has. After I scored, we came off the field chest-bumping and screaming. It’s so much fun to play with him.” Fitzpatrick also rushed for a touchdown, accounting for 21 of the Dolphins 31 points while their defense held Jacksonville to only 13.

Fitzpatrick has consistently shown that he is inconsistent. This level of play will not maintain, but Fitzpatrick was emphatic that these performances are why he sticks around the game after so many years. “It’s why I still play,” Fitzpatrick said. “I enjoy playing, especially when you’re having success. I feel like the luckiest guy in the world sometimes getting to go outside and play football with my friends.” The Dolphins always overperform their expectations because of games like these were Fitzpatrick looks like an All-Pro and great coaching from Patriots disciple Brian Flores. They are far away from playoff contention, but the Dolphins look like the seeding spoilers for elite teams that they have been in years past.