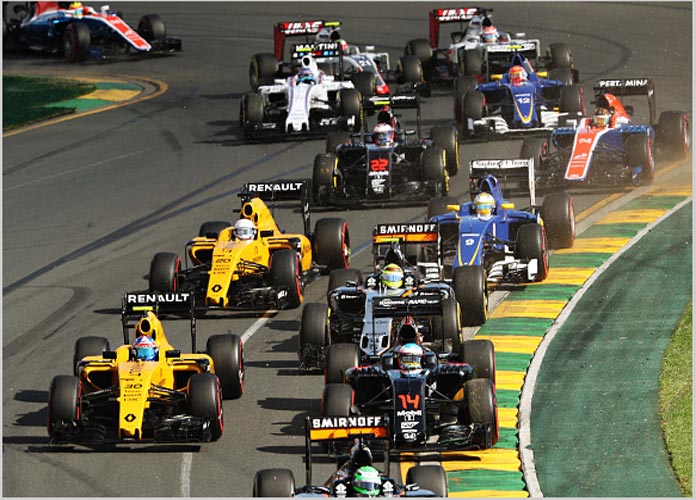 Approximately one third of the way through the race, the right front tire of Alonso’s McLaren collided with the left rear tire of Gutierrez’s Haas as the Mexican driver braked to make the bend at Turn 3 on Lap 17.

As a result of the crash, Alonso’s car was propelled at high speed into the trackside concrete barrier and flipped twice in a barrel roll before coming to rest in a crumpled wreck.

The force of the crash was so great that fans were left fearing the worst before Alonso crawled out of the cockpit and limped away, shaking hands with a worried Gutierrez and waving to the crowd.

”I’m thankful for the safety of these cars,” Alonso said. ”I’m alive thanks to the job of the last 10 to 15 years of Formula One.”

”You want to stop but it doesn’t stop. It keeps going and going and going,” the Spaniard added. “It was quite scary, but at the last moment the car stopped and I had a little space to go out and I said `I will go out quickly because my mother will be watching at home.”’

Gutierrez quickly ran over to the wrecked McLaren and gave Alonso a handshake and embrace, clearly thankful that he had not been harmed. The incident has now reignited a debate concerning further Formula One safety measures, including the installation of a cockpit ‘halo’ device to protect drivers from being struck on the head by debris and bouncing wheels.

”It was a big relief to see that he was fine,” Gutierrez said. ”It was a very scary moment and not very pleasant to see how his car ended up.

”We were both a bit shocked from the crash. We came together and spoke a little bit, but we’re all good most importantly.”