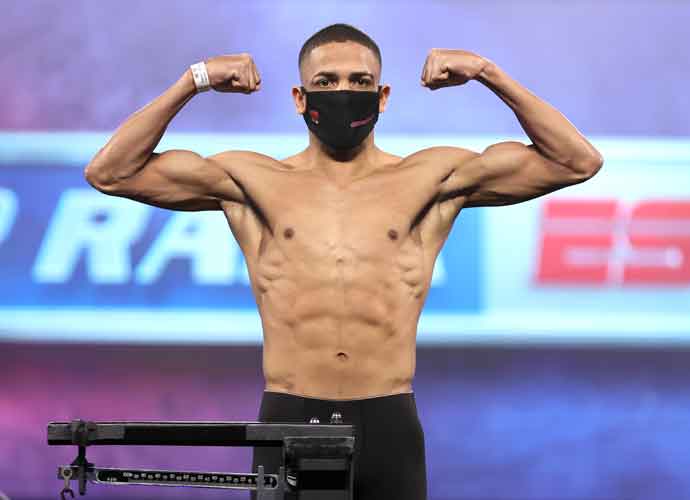 LAS VEGAS, NV - DECEMBER 11: Felix Verdejo flexes on the scale ahead of his fight with Masayoshi Nakatani at the MGM Grand Conference Center on December 11, 2020 in Las Vegas, Nevada. (Photo by Mikey Williams/Top Rank Inc via Getty Images)

After the body of Keishla Rodriguez was discovered by the FBI., lightweight boxer Felix Verdejo is facing kidnapping and carjacking charges resulting in death, plus charges for intentionally killing an unborn child.

The FBI found the body of the 27-year-old Rodriguez, who was pregnant with Verdejo’s unborn baby. Rodriguez was reported missing on Thursday, and her body was recovered in the San Jose Lagoon on Saturday. She was identified Sunday via dental records, Puerto Rico’s Institute of Forensic Science said in a statement. Verdejo self-surrendered on Sunday to federal authorities.

The FBI criminal complaint accuses Verdejo of punching Rodriguez in the face and injecting her with a syringe filled with an unidentified substance. The report further states that Verdejo then bonded Rodriguez’s arms and feet with wire, tied her to a heavy block, and threw her off a bridge on Thursday morning. The complaint states that Verdejo then shot at Rodriguez’s body as he stood on the bridge. The complaint says an unidentified witness helped Verdejo kidnap and kill Rodriguez.

Investigators were able to locate Rodriguez’s body through cell phone records and surveillance footage from the bridge. Her car was found abandoned in Canovanas, about 13 miles from the bridge, on Friday. Police found at least one shell casing on the bridge.

Police interviews revealed that Rodriguez told her family that she was pregnant with Verdejo’s child. Keila Ortiz, the victim’s mother, told reporters that her daughter called her on Thursday, before her disappearance, and told her that the boxer was going to take her home to see the pregnancy test results. “I told her, ‘Be careful,’ because he had already threatened her,” Ortiz said. In addition, Ortiz said that the lightweight boxer had pressured her daughter to not have the baby because of his career and family.

Verdejo (27-2) is a former Olympian who represented Puerto Rico in 2012. His professional career was temporarily sidetracked after he was hospitalized following a motorcycle crash in 2016.

The boxer could face life in prison or the death penalty for the carjacking and kidnapping charges, and life imprisonment for the intentional killing of an unborn child.