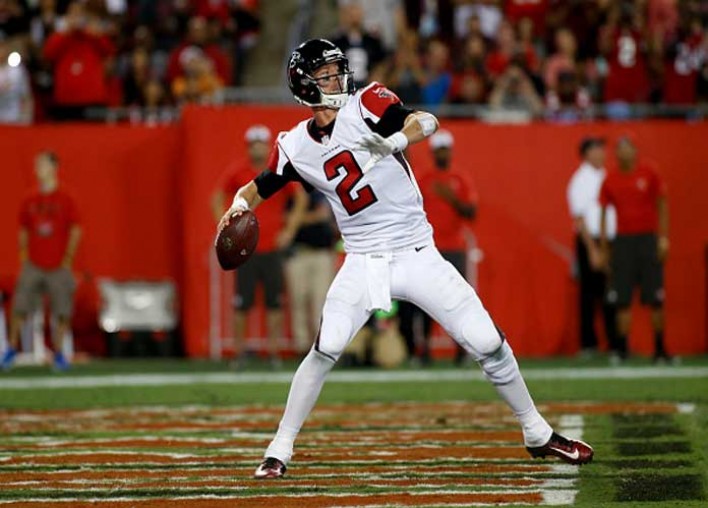 TAMPA, FL - NOVEMBER 3: Quarterback Matt Ryan #2 of the Atlanta Falcons drops back to pass during the second quarter of an NFL game against the Tampa Bay Buccaneers on November 3, 2016 at Raymond James Stadium in Tampa, Florida. (Photo by Brian Blanco/Getty Images)

The Atlanta Falcons defeated the Buccaneers 24-21 in Tampa Bay on Monday night after the hosts missed a 54-yard field goal in the final moments.

The defending NFC champions (9-5) trail New Orleans and Carolina by one game with two weeks left in the regular season.

“We’re right where we need to be at this point of the season,” said quarterback Matt Ryan following the victory. “We’ve got to find a way to get back to work this week, try to improve and make sure we play the best we’re capable of playing this Sunday.”

”That’s really all our focus needs to be about,” he added. ”If we’re worried about anything else then you’re not as locked in as you need to be.”

Devonta Freeman had 194 yards from scrimmage — rushing for 126 on 22 carries and catching five passes for a team-high 68 yards — to help lead Atlanta to its fifth win in six games, which eliminated Green Bay from playoff contention.

Ryan threw for 212 yards, a touchdown and no interceptions.

”Can’t think too far into the future. Always focus on what we’ve got next,” Falcons safety Keanu Neal said. ”Look too far ahead, you lose sight of the present.”

Freeman’s 32-yard TD run gave the Falcons a 10-point lead that the defense almost blew over the final eight minutes.

Since Tevin Coleman is out with a concussion, third-string running back Terron Ward shared the rushing load with the two-time 1,000-yard rusher.

It has been rumored that the struggling Bucs (4-10) will soon be parting ways with coach Dirk Koetter, and it has also been speculated that Koetter could be replaced by ESPN analyst Jon Gruden, a former coach for Tampa Bay.

Gruden, whose brother Jay Gruden is the Washington Redskins’ head coach, led the Buccaneers to their lone Super Bowl title in 2002. Jon Gruden was inducted into the Bucs’ Ring of Honor on Monday night.

Jameis Winston faced a lot of pressure but still excelled. Tampa Bay’s quarterback completed  27-of-35 passes for 299 yards and three touchdowns. He also had a 130.5 rating — the second best of his career.

The Falcons next visit New Orleans on Sunday before hosting Carolina for their regular season finale. The Buccaneers visit the Panthers on Sunday and then host the Saints on Dec. 31.

TAMPA, FL – NOVEMBER 3: Quarterback Matt Ryan #2 of the Atlanta Falcons drops back to pass during the second quarter of an NFL game against the Tampa Bay Buccaneers on November 3, 2016 at Raymond James Stadium in Tampa, Florida. (Photo by Brian Blanco/Getty Images)