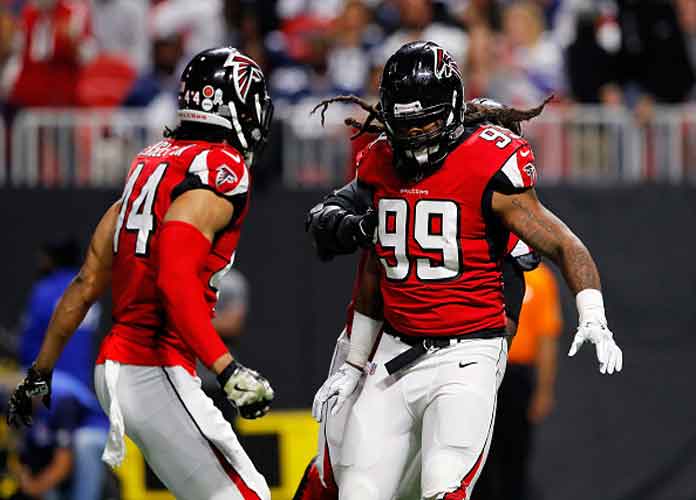 ATLANTA, GA - NOVEMBER 12: Adrian Clayborn #99 of the Atlanta Falcons celebrates a sack during the second half against the Dallas Cowboys at Mercedes-Benz Stadium on November 12, 2017 in Atlanta, Georgia.

Before Sunday, Clayborn had two sacks through the first eight games of the season. The 29-year-old defenseman — who is in his third season with Atlanta — now has a team-leading eight sacks. Clayborn’s previous career high was 7.5 sacks as a rookie with Tampa Bay in 2011.

The DE was one shy of the NFL record of seven in a game, set by Derrick Thomas in 1990.

Adrian Clayborn, you are a MONSTER.

A franchise-record SIX sacks in one game! pic.twitter.com/YlBIrNmCYh

Clayborn broke the record previously set by Hall of Famers Claude Humphrey and Chuck Smith. Humphrey had five in a game twice, and Smith recorded a five-sack game against the New Orleans Saints on Oct. 12, 1997.

Clayborn completely outplayed Cowboys left tackle Chaz Green, and all six of his sacks were on quarterback Dak Prescott.

The DE will now earn a sweet payday for his performance, according to ESPN’s Field Yates:

Update: by reaching 8.0 sacks this season, Falcons DE Adrian Clayborn has triggered a $750,000 incentive bonus if he finishes the season on the 53-man roster. https://t.co/yibqZQyHqL

“I mean, it’s unfortunate,” Green said. “You have some good days. You have some bad days. This obviously wasn’t my best day. I take this on my shoulders and look at myself in the mirror. Just need to fix the things I need to fix. I’m going to get it fixed.”

Two other Falcons defenseman managed to sack Prescott: Dontari Poe and Brooks Reid. The only Cowboys quarterback to be sacked more times in a game was Troy Aikman, who was taken down by the Philadelphia Eagles 11 times in 1991.

The Falcons (5-4) next visit the Seattle Seahawks on Nov. 20, while the Cowboys (5-4) will host the Eagles on Sunday.

ATLANTA, GA – NOVEMBER 12: Adrian Clayborn #99 of the Atlanta Falcons celebrates a sack during the second half against the Dallas Cowboys at Mercedes-Benz Stadium on November 12, 2017 in Atlanta, Georgia. (Photo by Kevin C. Cox/Getty Images)