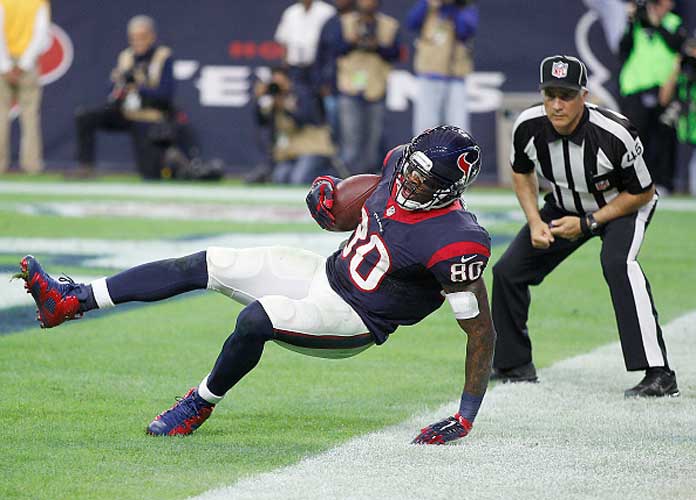 HOUSTON, TX - DECEMBER 28: Andre Johnson #80 of the Houston Texans catches a touchdown pass against the Jacksonville Jaguars in the fourth quarter in a NFL game on December 28, 2014 at NRG Stadium in Houston, Texas. (Photo by Bob Levey/Getty Images)

Less than one week after Arian Foster retired from the NFL, another former Houston Texans star is saying goodbye to the game.

Wide receiver Andre Johnson told the Tennessee Titans early Monday he is retiring after 14 seasons in the NFL.

Johnson, 35, spent last season with the Colts after 12 extraordinary years with the Texans, who drafted him third overall in 2003 out of the University of Miami. He signed with the Indianapolis Colts before the 2015 season on a three-year deal. He was released after last offseason and then signed a two-year deal with the Titans in July.

The most accomplished player in Texans history, Johnson ended his career with an incredible 1,062 regular-season catches for 14,185 yards and 70 touchdowns. The seven-time Pro Bowl wideout is 10th all-time in receiving yardage.

His seven 1000-yard seasons are three more than Buffalo’s Andre Reed, who was inducted into the Hall of Fame in 2014.

A giant, 6-foot-3, 219-pound lead pass-catcher with more than enough speed, hand strength and physical characteristics to stop opposing cornerbacks. Johnson was a constant asset on a Houston squad that struggled to pair him with a premier quarterback.

Johnson had nine catches for 85 yards this season, including the game-winning touchdown grab in Tennesee’s 16-15 win over the Detroit Lions in Week 2.

“Going back to his days at the University of Miami, Andre was one of the most impressive wide receivers I’ve scouted,” said Robinson. “He had a professional approach to the game both on and off the field and in my opinion is one of the best to have played the game. … We wish him nothing but the best moving forward in whatever endeavors he chooses.”

Former Texans GM Charles Casserly made the decision to draft Johnson in 2003 and also lauded him during a Monday morning conversation with NFL Network.

“There’s not many players, when you draft them — even when you draft them high — that you figure are going to be Pro Bowl players and dominant players … but Andre did,” Casserly said. “Andre was the biggest, fastest, most-talented wide receiver that I ever scouted. We worked him out at the University of Miami on grass. He ran 4.35. And he played fast on the tape.”

Casserly continued: “To get a guy that big, that fast, that’s a great player — now that’s a rare situation. And on top of it, his work ethic was off the charts. … He was a guy who set the example by the work ethic. How hard he practiced. He went hard every rep, he was top of the charts in the offseason.”

HOUSTON, TX – DECEMBER 28: Andre Johnson #80 of the Houston Texans catches a touchdown pass against the Jacksonville Jaguars in the fourth quarter in a NFL game on December 28, 2014 at NRG Stadium in Houston, Texas. (Photo by Bob Levey/Getty Images)