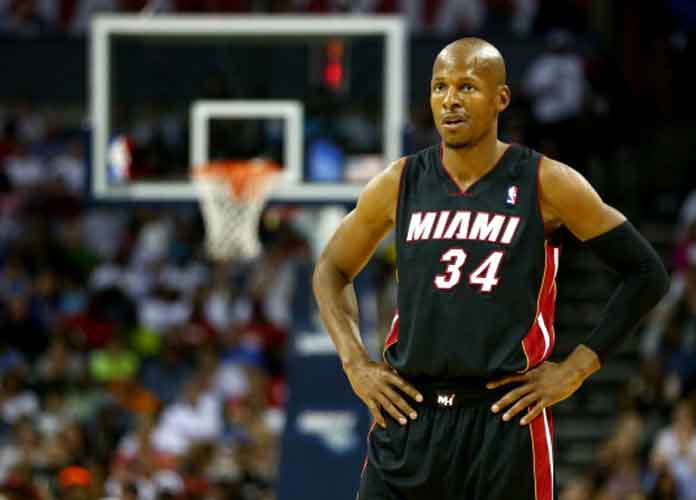 CHARLOTTE, NC - APRIL 28: Ray Allen #34 of the Miami Heat during their game against the Charlotte Bobcats in Game Four of the Eastern Conference Quarterfinals during the 2014 NBA Playoffs at Time Warner Cable Arena on April 28, 2014 in Charlotte, North Carolina. NOTE TO USER: User expressly acknowledges and agrees that, by downloading and or using this photograph, User is consenting to the terms and conditions of the Getty Images License Agreement. (Photo by Streeter Lecka/Getty Images)

Former NBA shooting guard Ray Allen has claimed he is a victim of “catfishing,” and has demanded that a court toss out a case in which he is accused of stalking somebody he met online.

Allen, 42, filed an emergency motion in Orange County, Florida on Tuesday, one day after Bryant Coleman told the court he has been followed by the ten-time All-Star and two-time NBA champion.

Allen — a former Milwaukee Bucks, Boston Celtics and Miami Heat star — alleges Coleman is the one stalking him. ‘

“Coleman pretended to be a number of attractive women interested in Ray Allen,” read the motion filed on Allen’s behalf. “Ray believed he was speaking with these women and communicated with them.”

The phrase “catfish” references the MTV show of the same name that deals with people’s deceptive encounters with individuals they meet online.

Attorney David Oscar Markus released a statement saying Allen took legal action in an effort to put an end to threats against him and his family, and that Allen was the victim “of an online scheme to extract money and embarrass him by someone who appears to be troubled.”

Allen added that Coleman threatened to reveal details of their conversations, including personal information. The pair reached a deal on keeping things private, but Allen says Coleman broke the deal and began “cyber-stalking” him, or harassing him and his family through several social media accounts.

Markus added that Allen regrets “engaging with this person online and is thankful they never met in person.”

Ray Allen’s attorney, David Oscar Markus, released this statement to AP and other outlets about the retired NBA star’s claim of being catfished. pic.twitter.com/pncfpNwCSj

Allen is the NBA’s all-time leader in three-pointers scored with 2,973. In 18 seasons in the league, he won championships with Boston in 2008 and Miami in 2013, the second title coming after he made one of the most dramatic shots in playoff history — a game-tying 3-pointer with 5.2 seconds left in regulation of Game 6 of The Finals against San Antonio, a game that Miami would win in overtime.

He averaged 18.9 points per game in his career. He and his family have lived in the Miami area since his retirement in 2014.

CHARLOTTE, NC – APRIL 28: Ray Allen #34 of the Miami Heat during their game against the Charlotte Bobcats in Game Four of the Eastern Conference Quarterfinals during the 2014 NBA Playoffs at Time Warner Cable Arena on April 28, 2014 in Charlotte, North Carolina. (Photo by Streeter Lecka/Getty Images)