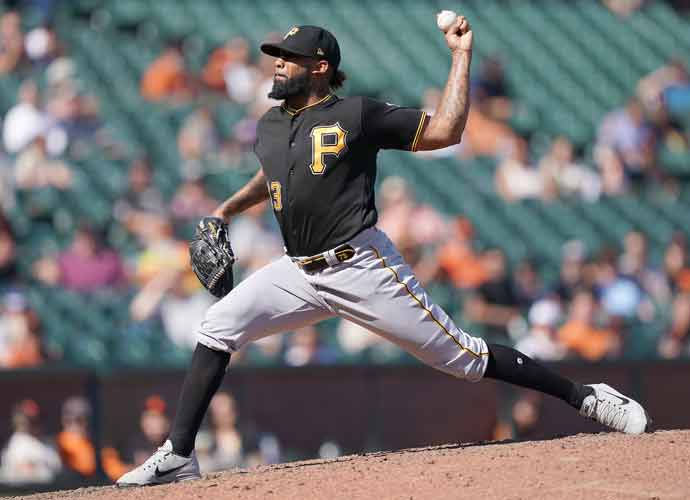 SAN FRANCISCO, CALIFORNIA - SEPTEMBER 12: Felipe Vazquez #73 of the Pittsburgh Pirates pitches against the San Francisco Giants in the bottom of the ninth inning at Oracle Park on September 12, 2019 in San Francisco, California. The Pirates won the game 4-2. (Photo by Thearon W. Henderson/Getty Images)

Former MLB relief pitcher Felipe Vazquez was sentenced to two to four years in prison Tuesday after being found guilty of statutory sexual assault and child pornography, among other charges, in a case involving a girl who was 13 when the encounters began.

The sentencing includes two additional years of parole. Vazquez has already served almost two years in jail and will be eligible for a parole hearing in one month after arriving in prison.

Prosecutors said the former All-Star closer was in touch with the 13-year-old girl by text message from 2017 to 2019. Vazquez met with the girl outside her home in Scottdale, southeast of Pittsburgh, where, investigators say, he told them he tried to have sex with her.

The girl’s mother found their communication after the family moved from Pennsylvania to Florida. Vazquez was reported to have remained in contact with the girl after she moved. The girl testified they had sex in his car outside her home hours before a Pirates game.

Vazquez was arrested in September 2019 and was charged with over 20 felonies. On Tuesday, he was found guilty of 15 counts of sexual misconduct, including statutory sexual assault, unlawful contact with minors, corruption of minors and indecent assault. He was not found guilty of 10 other counts of unlawful contact or communication with a minor, relating to sexually explicit text messages, pictures and videos that prosecutors say he and the teen exchanged over two years.

The former pitcher could face additional years behind bars as he also faces charges in both Missouri and Florida involving the same victim.