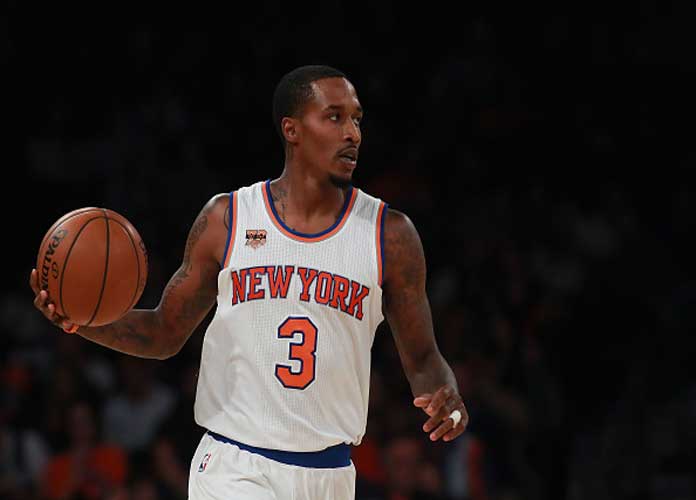 NEW YORK, NY - OCTOBER 15: Brandon Jennings #3 of the New York Knicks in action against the Boston Celtics during the first half of their preseason game at Madison Square Garden on October 15, 2016 in New York City.

Brandon Jennings, an eight-year veteran who was waived by the New York Knicks on Monday, has agreed to join the Wizards for the remainder of the 2016-2017 season, pending him clearing waivers.

The Knicks signed the 27-year-old to a one-year, $5 million deal this past offseason. Teams with enough salary cap space have until 5 p.m. on Wednesday to claim Jennings off waivers, though no other NBA team is thus far expected to.

The Wizards will be Jennings’ sixth NBA team.

On Tuesday night, when the Wizards defeated the Golden State Warriors 112-108, Trey Burke did not play his normal rotation minutes. Burke originally signed with Washington to back up Wall.

Jennings played four seasons for the Milwaukee Bucks and averaged in double figures all four years. His career-high campaign came in 2011-2012 when he averaged 19.1 points per game, along with 5.5 assists per game. He then moved to Detroit in a trade during the offseason where he went on to average double digits in scoring during his first two seasons with the Pistons.

The guard also played overseas, with the Lottomatica Roma of the Italian Series A league, from 2008-2009 but was unsuccessful there.

As a Knick, Jennings had an interesting relationship with the Wizards this past season. During a preseason game against Washington, Jennings became involved in a light altercation with Casper Ware, a training camp invitee who was later released. Jennings trash-talked, committed a hard foul and taunted Ware by clapping his hands while playing defense. Then, when the Knicks and Wizards met again on Nov. 17, Wall got his revenge on Jennings by mimicking his move– clapping his hands in the Knick’s face.

NEW YORK, NY – OCTOBER 15: Brandon Jennings #3 of the New York Knicks in action against the Boston Celtics during the first half of their preseason game at Madison Square Garden on October 15, 2016 in New York City.