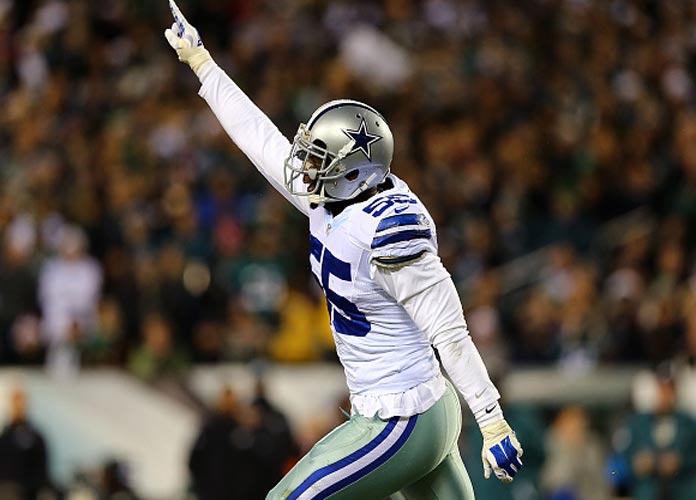 PHILADELPHIA, PA - DECEMBER 14: Rolando McClain #55 of the Dallas Cowboys celebrates during the game against the Philadelphia Eagles at Lincoln Financial Field on December 14, 2014 in Philadelphia, Pennsylvania. (Photo by Elsa/Getty Images)

According to reports, McClain was driving 70 mph in a 55-mph zone when police stopped him. Upon approaching McClain’s white Mercedes, the smell of marijuana was detected. Prior to the search of his vehicle, McClain informed the officer that there was a handgun in the car.

Police found a bag of marijuana and an unlicensed firearm in the car. Both McLain and his passenger were arrested. McClain was charged with second-degree unlawful possession of marijuana, carrying a pistol without a permit and speeding.

McClain’s bond which has since been posted was set at $1,000.

The ex linebacker has been in legal trouble before stemming from the same causes.

In 2017, he was arrested for possession of marijuana and carrying a concealed weapon.

McClain’s football career has been full of highs and lows. The 33-year-old was one of the most highly-touted prospects in the Class of 2007.

Heading into his collegiate career he was the No. 2 linebacker in the nation, opting to play for Nick Saban and the Alabama Crimson Tide. After a dominating college career that saw him win the Butkus Award, Jack Lambert Trophy, a National Championship and multiple All-All American honors, McClain declared for the NFL Draft.

He was selected with the 8th overall pick in the 2010 NFL Draft by the Oakland Raiders. He quickly made a name for himself with his hard-hitting style of play, however, due to off-field incidents he was waived by the Raiders in April 2013.

After signing with the Baltimore Ravens on a non-guaranteed deal, McClain retired from the NFL at the age of 23 prior to training camp.

A year later, however, the Cowboys enlisted McClain’s services after linebacker Sean Lee suffered a season-ending injury. McClain quickly became a team leader and played a key role in the Cowboy’s on-filed success.

After resigning with Dallas on a one-year deal, McClain was suspended multiple times by the NFL for violating the league’s anti-drug policy. He was suspended indefinitely for the third time on December 30, 2019.

McClain’s attorney said after his arrest that the public should reserve further judgment until more details regarding the incident have been made public.