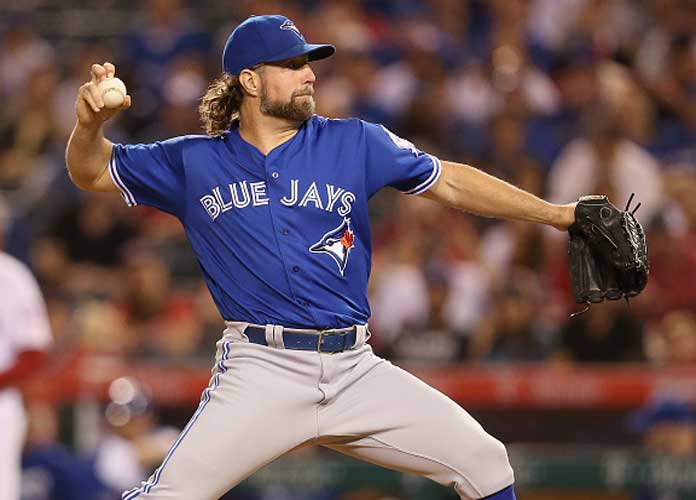 ANAHEIM, CALIFORNIA - SEPTEMBER 16: R.A. Dickey #43 of the Toronto Blue Jays throws a pitch in the first inning against the Los Angeles Angels of Anaheim at Angel Stadium of Anaheim on September 16, 2016 in Anaheim, California. (Photo by Stephen Dunn/Getty Images)

R.A. Dickey may be 42 years old, but he’s not about to retire just yet.

The former Toronto Blue Jays starting right-handed pitcher signed a one-year, free-agent contract with the Atlanta Braves on Thursday, a deal that includes an $8 million guarantee.

Dickey said he knew the Braves would be a good fit after meeting in Nashville, Tennessee, with a group that included manager Brian Snitker, general manager John Coppolella and two Hall of Famers– former manager Bobby Cox and knuckleballer Phil Niekro.

“I had a great feeling then there was great hope I would be able to join the organization,” Dickey said Thursday after agreeing to the deal.

“Phil and I have a good relationship,” Dickey said. “I consider him a friend. We filmed a documentary together.”

He gets a $7.5 million salary next year, and the Braves have an $8 million option for 2018 with a $500,000 buyout. The deal for the 42-year-old right-hander, the first of the 158 free agents to switch teams this offseason, is subject to a successful physical, tentatively planned for late next week.

Dickey spent the last four seasons with the Blue Jays and considered retirement this year when he was not included on the team’s postseason roster. After he became a free agent, however, he decided to sign a one-year deal with an option for another to pitch for a team that is about 250 miles from his home in Nashville.

Dickey pitched three years with the Mets and won the 2012 National League Cy Young Award in his final season there. He had a career-high 20 wins that year.

In December 2012, the Mets traded him, along with catchers Josh Thole and Mike Nickeas in a blockbuster deal to the Blue Jays for Travis d’Arnaud, Wuilmer Becerra, John Buck and top pitching prospect Noah Syndergaard.

The Mets signed him to a minor league free-agent deal in 2010, and after six weeks at Class AAA Buffalo, he was inserted into the Mets’ starting rotation and enjoyed the most success of his career.

Dickey said it was a challenge to pitch in the AL East’s small parks and said the Braves’ potential in their new SunTrust Park in suburban Atlanta was a selling point.

ANAHEIM, CALIFORNIA – SEPTEMBER 16: R.A. Dickey #43 of the Toronto Blue Jays throws a pitch in the first inning against the Los Angeles Angels of Anaheim at Angel Stadium of Anaheim on September 16, 2016 in Anaheim, California. (Photo by Stephen Dunn/Getty Images)