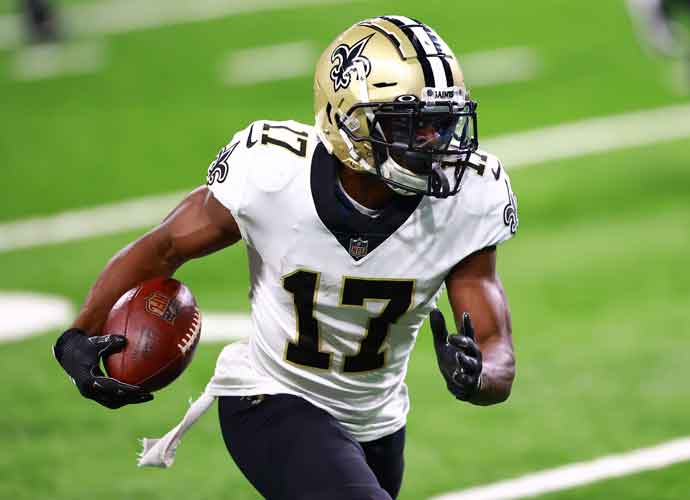 DETROIT, MI - OCTOBER 04: Emmanuel Sanders #17 of the New Orleans Saints makes a catch and runs the ball in the fourth quarter of the game against the Detroit Lions at Ford Field on October 4, 2020 in Detroit, Michigan. (Photo by Rey Del Rio/Getty Images)

NFL wide receiver Emmanuel Sanders announced his retirement Wednesday after 12 seasons in the league. A key contributor to the Denver Broncos organization that won the Super Bowl in 2016, Sanders signed a one-day contract so that he could retire as a member of his former team.

“When I think about my career, it has been a blessing,” Sanders said in a press conference Wednesday.

Coming out of Southern Methodist University in 2010, Sanders earned all-conference honors in his last two seasons but was not a standout in that year’s draft class. The Pittsburgh Steelers selected him in the third round, and though he only started once in his rookie year, he also made his first Super Bowl appearance when the team lost to the Green Bay Packers.

In four seasons with Pittsburgh, Sanders gradually worked his way up the depth chart, starting in 10 games in 2013. His breakout didn’t come until the following season, however, when he entered free agency and signed with the Broncos. Alongside new teammates Peyton Manning and Demaryius Thomas, Sanders made an immediate impact, starting all 16 regular season games and earning a career-high 1,404 receiving yards and nine touchdowns. He also made his first of two Pro Bowl appearances.

Though he regressed slightly in 2015, Sanders was nevertheless a key contributor on a Denver team that went 12-4 and cruised into the postseason. In Super Bowl 50, his second appearance, the Broncos defeated the Carolina Panthers to win the championship. Sanders was the top receiver in the game catching six of eight targets for 83 yards.

After the team’s Super Bowl season, Sanders continued to contribute for several more years before the team traded him to the San Francisco 49ers in 2019. His timing was opportune, as the 49ers were already well on their way to a postseason run when Sanders joined. San Francisco won the NFC Championship but lost to the Kansas City Chiefs in Super Bowl LIV.

Following stints in New Orleans and Buffalo in 2020 and 2021, Sanders has decided to call it a career ahead of the upcoming season.

In 12 NFL seasons, Sanders compiled 9,867 total receiving yards and 52 touchdowns. Sanders said that he was still receiving offers from NFL teams for 2022 but cited his health and the recent death of Demaryius Thomas, his former teammate, as reasons to step away.

“The game of football is tough on the body, and you know I lost a close friend, Demaryius Thomas. And for me, it’s about longevity of life now. I had a heck of a career, 12 years, three Super Bowls,” Sanders said. “To me, I feel like what else do I have to prove?”

Sanders also confirmed that he had agreed to a deal as a television analyst and is waiting to sign his contract before revealing his employer. He plans to spend more time with his family in the next stage of his life.