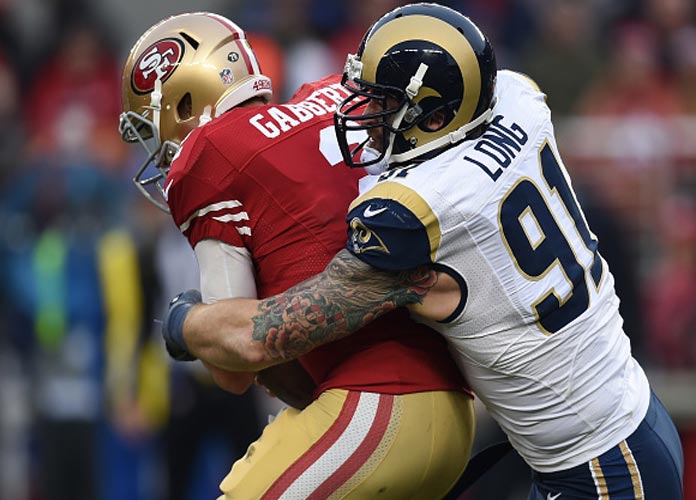 Caption:SANTA CLARA, CA - JANUARY 03: Blaine Gabbert #2 of the San Francisco 49ers is sacked by Chris Long #91 of the St. Louis Rams during their NFL game at Levi's Stadium on January 3, 2016 in Santa Clara, California. (Photo by Thearon W. Henderson/Getty Images)

The Philadelphia Eagles agreed to a two-year deal with veteran defensive end Chris Long on Tuesday.

Long helped lead the New England Patriots to a Super Bowl LI victory over the Atlanta Falcons in February. A No. 2 overall draft pick by the Rams out of Virginia in 2008, the 32-year-old spent eight seasons in St. Louis before he joined the Patriots in 2016.

He recorded four sacks and 10 quarterback hits in 16 games with the Patriots and was a key member of a defense that allowed an NFL-low 250 points.

In an Instagram post, Long thanked Patriots fans, his teammates and coach Bill Belichick, and added: “This has zero to do with money. … It’s the right move in my heart because I want to get back to being the player I was before. I’m thankful for my role this year, but as a competitor, I’m itching to do what I do best.”

Robinson, a first-round pick (32nd overall) of the New Orleans Saints in 2010, has played in 81 regular-season games with 49 starts and has 260 tackles, ten interceptions, 59 passes defended and three forced fumbles. After five years with the Saints, Robinson played for the San Diego Chargers in 2015 and the Indianapolis Colts in 2016. Robinson originally signed a three-year, $13.5 million contract with the Colts. The 29-year-old only played seven games last season due to a variety of injuries.

Caption:SANTA CLARA, CA – JANUARY 03: Blaine Gabbert #2 of the San Francisco 49ers is sacked by Chris Long #91 of the St. Louis Rams during their NFL game at Levi’s Stadium on January 3, 2016 in Santa Clara, California. (Photo by Thearon W. Henderson/Getty Images)