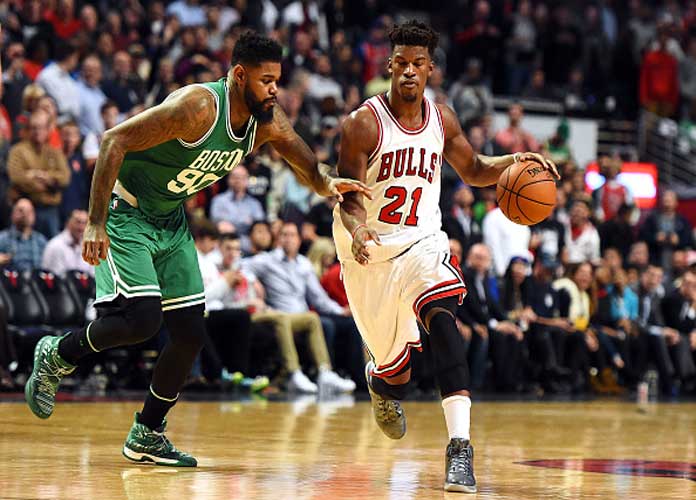 CHICAGO, IL - OCTOBER 27: Jimmy Butler #21 of the Chicago Bulls drives to the basket against Amir Johnson #90 of the Boston Celtics during the second half of a game at the United Center on October 27, 2016 in Chicago, Illinois.

Wade sunk the game-winning, 25-foot 3-pointer with 26.3 seconds remaining. Taj Gibson contributed 18 points and 10 rebounds, and the Bulls started off their season strong after missing the playoffs last year for the first time since 2008.

”To be able to make a shot like that and helps us get this win, it’s like the perfect storm,” Wade said.

“It’s people’s will to win,” said Butler.”I’m not saying a bad thing about anybody from last year. I just think I study the game a lot and put in a lot of work. But [Rajon] Rondo studies the game a lot. Every time I’m in the gym, he’s in the gym. That lets me know these (expletives) are coming to war with you every day.

“When I hit that deck, Rondo was right there. I want to play with guys who are going to play hard, are going to fight. D-Wade, Rondo and everyone else around the locker room, their will to win is real.”

Butler referred to a mini-fight with fellow Marquette alum Jae Crowder in which Rondo joined the fray and those three plus Thomas drew technical fouls.

Isaiah Thomas led the Celtics with 25 points. Avery Bradley had 16, and Jae Crowder 14 points, but Boston came up short after opening their season with a victory over Brooklyn one night earlier.

”We lost the game in a fashion we didn’t want to lose,” Crowder said. ”I feel like we got punked all night.”

The Bulls rebuilt their roster during the offseason, releasing one hometown superstar and welcoming another when they traded Derrick Rose to the New York Knicks and signed Wade to a two-year deal worth approximately $47 million from the Miami Heat.

The three-time NBA champion and 12-time All-Star has made a strong start with the Bulls after 13 seasons in Miami. Wade hit 4 of 6 3-pointers in this game after making just 7 of 44 all of last season.

Rondo, signed by Chicago after a comeback season with Sacramento, added nine assists. Butler got seven rebounds, and the Bulls trounced the Celtics on the glass, 55-36.

The Bulls led 95-81 halfway through the fourth quarter after newcomer Michael Carter-Williams sank a 3 and a floater and Butler hit a floater of his own.

The Celtics scored 11 in a row to stay in the game, a driving layup by Thomas cutting it to 95-92.

The Celtics will next visit the Charlotte Hornets on Saturday, while the Bulls will host the Indiana Pacers that same day.

CHICAGO, IL – OCTOBER 27: Jimmy Butler #21 of the Chicago Bulls drives to the basket against Amir Johnson #90 of the Boston Celtics during the second half of a game at the United Center on October 27, 2016 in Chicago, Illinois.