Draymond Green Ejected Prior To Halftime During Warriors Win Over Grizzlies - uSports.org 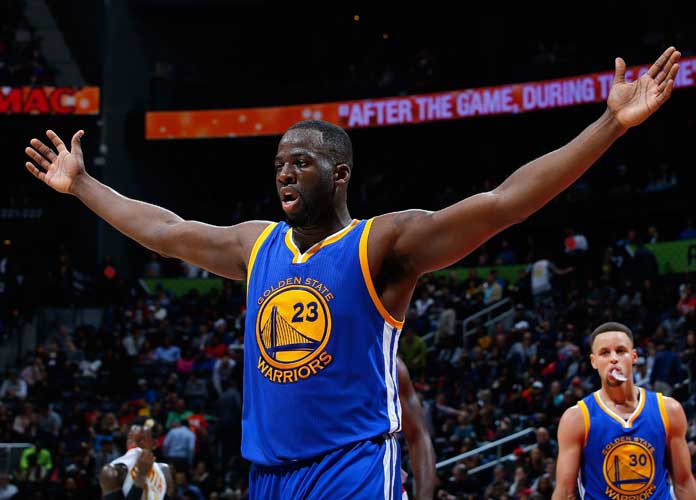 ATLANTA, GA - FEBRUARY 22: Draymond Green #23 of the Golden State Warriors reacts after being charged with a foul in the final minutes of their 102-92 win over the Atlanta Hawks at Philips Arena on February 22, 2016 in Atlanta, Georgia. (Photo by Kevin C. Cox/Getty Images)

Though he was ejected with about a minute remaining in the first half, Draymond Green made sure to greet each coach and teammate in the tunnel after the Golden State Warriors’ 117-116 Game 1 win over the Memphis Grizzlies.

Draymond Green to Stephen Curry after the Warriors win despite his first-half ejection 🔥pic.twitter.com/ZGCHvCrJir

“This is a huge game to win, especially with [Green] going out early,” teammate Jordan Poole said. “You really have to find that grit and grind and buckle down and lock in offensively and defensively. He is such a big part of our team … We were able to fill in for the energy he has.”

As Memphis’ Brandon Clarke went for a dunk with 1:18 showing in the second quarter, Green initially made contact with his head as Green went to swat the ball but grabbed Clarke’s jersey in the process.

Draymond Green has been EJECTED with a flagrant 2.

Pathetic. Utterly embarrassing how you get throw out for this. Refs continue to dictate outcomes of pivotal games. Sad.

“My hand got caught in his jersey!” Green pleaded to the refs, who deemed it a flagrant foul 2.

Green flailed around – eerily similar to Antonio Brown’s antics at MetLife Stadium – the court for several seconds, high-fived his teammates, was met with boos, and then exited. He finished with six points, four rebounds, three assists, three steals and a block.

Crowd chanting “throw him out” then Draymond Green gets ejected. His reaction: pic.twitter.com/gl1k6XKx4e

Though the Grizzlies didn’t feel the same way.

“He’s been known for flagrant fouls in his career,” Clarke said. “I’ve watched him on TV my whole life, it feels like. I wasn’t really shocked. I don’t really like to flop or nothing, but he did hit me pretty hard twice when I saw it again … It is not shocking that he did that. Something he has done in the past.”

“The first part was the wind-up and significant contact to the face, and then the pull down from the jersey grab and throw down to the floor to an airborne vulnerable player makes that unnecessary and excessive,” Crew Chief Kane Fitzgerald said in a pool report.

“I think tonight it was probably a reputation thing more so than a hard foul,” Green said after the game on his podcast.

Golden State began the third on a 13-5 run, which appeared to be the momentum shift in the victory.