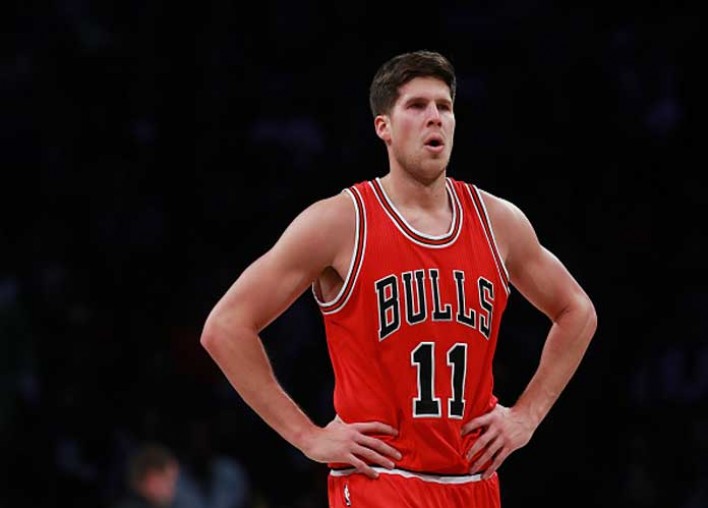 NEW YORK, NY - OCTOBER 31: Doug McDermott #11 of the Chicago Bulls looks on against the Brooklyn Nets during the second half at Barclays Center on October 31, 2016 in New York City.

Doug McDermott broke out of his four-game slump to score a career-high 31 points on Sunday night in leading the Chicago Bulls to a 108-104 road victory over the Memphis Grizzlies.

McDermott, who shot 7 of 31 from the field in his previous four games, got 20 of his points in the second quarter, as well as the final two free throws.

The third-year star helped replace the scoring missing from Dwyane Wade, who did not play on the second night of a back-to-back after the Bulls defeated New Orleans at home Saturday.

”You can’t be perfect every game, so you’ve just got to find a way to contribute out there and continue to work on your game,” said McDermott, who missed only one of seven shots in the second frame. ”That’s what I’ve done, and I was rewarded for the hard work.”

“He’s too good of a shooter to stay in a slump,” Hoiberg said. “He puts too much work in. He cares. When Jimmy was out of the game, Doug was the guy we went to on the block. He showed how versatile of a scorer he is today, not only hitting 3s but getting to the line 11 times and getting it done in the post.”

The Bulls broke a 104-all tie– the 11th in the game– with 26 seconds remaining on a 15-footer from Butler, who also sank an 18-footer with 53.6 seconds left. McDermott hit the last tow free throws with just under seven seconds left.

Mike Conley led the Grizzlies with 28 points and eight assists, while Marc Gasol had 24 points and 11 rebounds. Zach Randolph finished with 15 points and a season-best 16 boards.

The game featured 16 lead changes, and neither team held a double-digit lead. The Bulls also tied their season high with a 38-point second quarter.

“We couldn’t get to our defensive coverage to save our lives down the stretch,” Memphis coach David Fizdale said. “The second and fourth quarters, we didn’t defend at the level we are capable of defending.”

This is the 15th season Memphis has hosted a game on Martin Luther King, Jr. Day weekend. The Grizzlies are 6-9 in the holiday game.

In observance of the holiday, the Grizzlies wore special MLK50 Pride uniforms. The black jerseys have sea foam blue numbers, letters and piping with the full T-shirt look instead of the normal sleeveless. The piping replicated the railing in front the rooms at the Lorraine Motel, where King was assassinated in 1968, and the blue color was similar to the doors on the rooms.

The Bulls next host the Dallas Mavericks on Tuesday night, while the Grizzlies will visit the Washington Wizards on Wednesday night.

NEW YORK, NY – OCTOBER 31: Doug McDermott #11 of the Chicago Bulls looks on against the Brooklyn Nets during the second half at Barclays Center on October 31, 2016 in New York City.