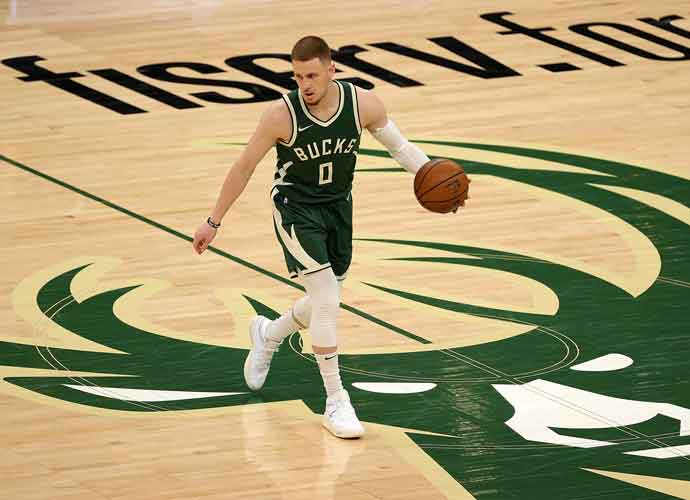 MILWAUKEE, WISCONSIN - MAY 11: Donte DiVincenzo #0 of the Milwaukee Bucks handles the ball during the first half of a game against the Orlando Magic at Fiserv Forum on May 11, 2021 in Milwaukee, Wisconsin. NOTE TO USER: User expressly acknowledges and agrees that, by downloading and or using this photograph, User is consenting to the terms and conditions of the Getty Images License Agreement. (Photo by Stacy Revere/Getty Images)

The Milwaukee Bucks will lose starting guard Donte DiVincenzo for the rest of the playoffs. The Bucks made an announcement Friday regarding the issue. DiVencenzo has suffered a torn ligament in his left ankle. DiVencenzo was made aware of the details of the injury by an MRI on May 28.

DiVincenzo suffered this injury during a drive to the basket in the second quarter of Thursday’s Game 3 victory over the Miami Heat. He went to plant his left foot, before immediately stopping play and limping off of the court. He then continued to the locker room for assessment. It was announced shortly thereafter that he would not be playing in the remainder of the game due to a foot contusion.

The Bucks still pulled out a 113-84 win against the Heat, moving their advantage in the series to 3-0. DiVincenzo put up 2.7 points, 6.3 rebounds, 2.7 assists and a steal per game prior to his injury. Milwaukee managed to take care of business in Game 4 with DiVincenzo and swept the Heat.

DiVincenzo had been a solid starter for the Bucks this season. He averaged 27.5 minutes played while posting 10.4 points and 5.8 rebounds per game. He also started in 66 games and shot 37.9% from the three-point arc. This has been DiVincenzo’s best season, which came after rumors of a trade that would have moved him to Sacramento for Bogdan Bogdanovíc.

Although DiVincenzo is not a massive scoring threat, he provided much-needed support with his rebounding and ability to space the floor. The Bucks will also lose a valuable player that added depth to their team. The Bucks lost much of their depth in a trade which gave them Jrue Holiday. Up to this point, the Bucks have heavily relying on their starters. They have also seen lots of support from P.J. Tucker, Pat Connaughton, Bryn Forbes and Bobby Portis. The Bucks must now make the most of a difficult situation, as their pool of dependable players shrinks.

After defeating the reigning Eastern Conference champs, the Bucks await the winner of the Nets-Celtics series.