Dolphins-Buccaneers Game In Miami Rescheduled For Week 11 Due To Hurricane Irma - uSports.org 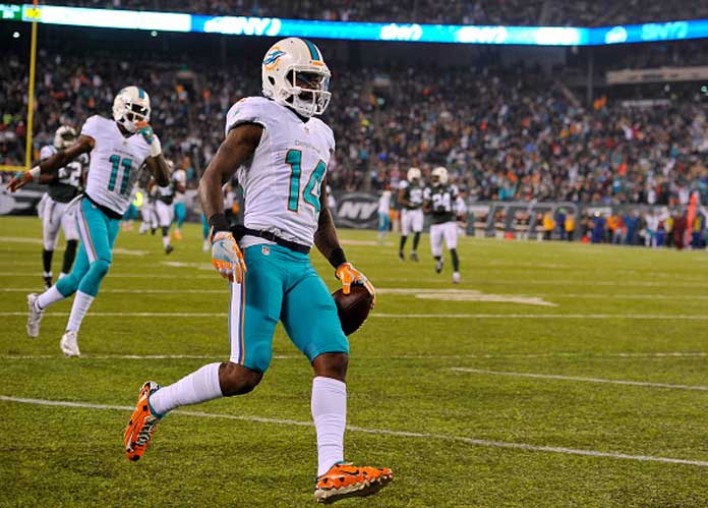 EAST RUTHERFORD, NJ - DECEMBER 17: Jarvis Landry #14 of the Miami Dolphins scores a touchdown against the New York Jets during the third quarter of the game at MetLife Stadium on December 17, 2016 in East Rutherford, New Jersey. (Photo by Alex Goodlett/Getty Images)

The NFL announced Tuesday that the Miami Dolphins’ Week 1 home game against the Tampa Bay Buccaneers on Sunday has been postponed due to the imminent approach of Hurricane Irma.

On Wednesday, the league confirmed that the game has been rescheduled to Nov. 19 (Week 11) at Miami’s Hard Rock Stadium. Hurricane Irma, a Category 5 storm currently hitting the Caribbean, is expected to primarily strike South Florida and is predicted to be the deadliest storm in the Atlantic in more than ten years. Irma is only the fifth Atlantic hurricane to reach maximum sustained winds of at least 185 mph or greater, according to Phillip Klotzbach, a tropical scientist at Colorado State University. The exact path of the storm remains unknown.

The NFL chose to move the date of the game rather than relocate the teams to a neutral site. Among the locales considered were Philadelphia and Pittsburgh.

Both teams will thus play for 16 consecutive weeks this season. The Dolphins will have a rough start to the season, as they are scheduled to play in Los Angeles, then New York and then London. They won’t return home until Week 5.

Given the schedule change, the Bucs will now play three of their first four games at home, beginning Sept. 17 against the Chicago Bears, the same day the Dolphins visit the Los Angeles Chargers.

Doug Martin — Tampa Bay’s starting running back who is suspended for the first three games of the season over a violation of the NFL’s performance-enhancing substance policy — will now make his debut on Oct. 5 against the New England Patriots instead of a week earlier.

Several other Florida-based sports teams have decided to reschedule some of their games this week.

Florida State announced Wednesday that the Seminoles’ football game against Louisiana-Monroe will be played Saturday at noon instead of at 7 pm EST. Florida announced a similar plan with its 7:30 pm EST kickoff against Northern Colorado moved to noon.

The University of Central Florida announced Tuesday that it was moving its football team’s game against Memphis from Saturday night to Friday evening in Orlando. Florida International’s home opener against Alcorn State on Saturday has been postponed, although no new date for that matchup has yet been set.

According to South Florida’s Sun Sentinel, the Dolphins have seven home games instead of eight because they agreed to move their Oct. 1 home game against New Orleans to London as part of a requirement for securing Super Bowl LIV in 2020. That resolution, passed in 2014, states Super Bowl hosts must host an international game within five years of being awarded the national championship game.

EAST RUTHERFORD, NJ – DECEMBER 17: Jarvis Landry #14 of the Miami Dolphins scores a touchdown against the New York Jets during the third quarter of the game at MetLife Stadium on December 17, 2016 in East Rutherford, New Jersey. (Photo by Alex Goodlett/Getty Images)