Dodgers Eager To Get Clayton Kershaw Back Friday Vs Marlins After LHP Suffers Lower Back Injury - uSports.org 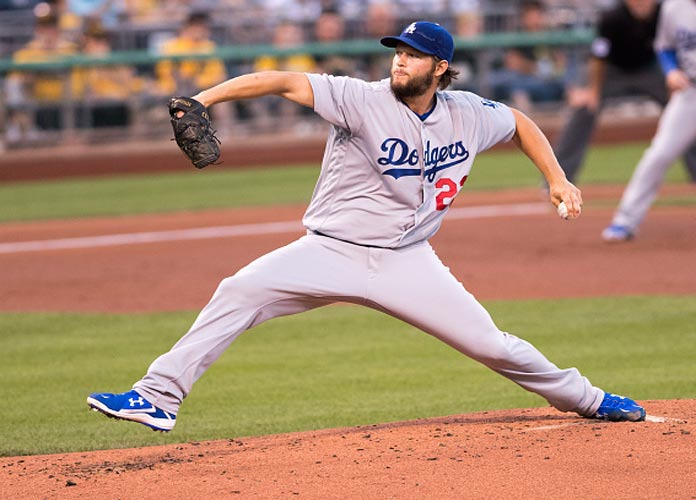 PITTSBURGH, PA - JUNE 26: Clayton Kershaw #22 of the Los Angeles Dodgers delivers a pitch in the first inning during the game against the Pittsburgh Pirates at PNC Park on June 26, 2016 in Pittsburgh, Pennsylvania. (Photo by Justin Berl/Getty Images)

Clayton Kershaw is set to return to the mound for the Los Angeles Dodgers Friday night following an 11-week absence due to a herniated disc in his lower back.

Kershaw, 28, will do so as the Dodgers increase their National League West lead over the rival San Francisco Giants to a season-high five games with merely 23 left to play.

On June 26, the Pittsburgh Pirates defeated the Dodgers, 4-3, at PNC Park. Kershaw took his second loss of the season that day. Three days later, he was diagnosed with a mild disc herniation in his lower back, and has not pitched in a major league game since.

He will be able to do so, however, on Friday night in Miami, when Kershaw starts the Dodgers’ three-game series opener against the Marlins.

“We’re excited for us as a team, but I think we’re excited for Clayton, too,” Manager Dave Roberts said. “It’s been a season of highs and lows. For him to watch his teammates the last two and a half months, it’s been very difficult. So the anticipation to get him back on Friday, yeah, we’re very excited.”

Kershaw was 11-2 with a 1.79 ERA at the time of his injury. Since then, the Dodgers first trailed the first-place Giants by eight games in the NL West after the June 26 defeat in Pittsburgh.

Having thrown only 34 pitches in three dominant innings of work for High-A Rancho Cucamonga in his lone rehab start last Saturday, Kershaw will likely be held to 60 to 70 pitches in his upcoming matchup against Marlins ace Jose Fernandez. The Dodgers hope he can stretch those pitches over five innings.

For a pitcher who has started an average of 32 games the last seven seasons, waiting proved to be the most difficult part. Kershaw hinted at that when he told the media on Sunday: “I didn’t really learn anything other than it’s not fun to not play.”

In private, the left-hander attempted to look happy for his teammates, although Dodgers closer Kenley Jansen said, “you could tell that he felt that pain for two months.”

“He’s an emotional guy,” Jansen said. “He tried to hide it. You could tell he wanted to be out there so bad to help us win.”

After Fernandez on Friday, Kershaw will face left-hander Rich Hill on Saturday and Kenta Maeda on Sunday.

The Washington Nationals lost pitcher Stephen Strasburg to injury yet again on Wednesday night, so that is also sure to affect the National League standings.

For more than a month, the Dodgers’ top three pitchers lined up only in their dreams. Now, they’re lined up to pitch consecutive games for the first-place squad in the NL West.

Said Roberts: “It’s starting to shape up the way we envisioned.”

Kershaw’s performance over the first three months of this season represented a new high with his 218 ERA+, 1.67 Fielding Independent Pitching and 16.11 strikeout-to-walk ratios over that span, all of which are career highs.

There is a strong reason to believe Kershaw could deliver yet another top performance in his return. Coming off the only other disabled list stint of his career in May 2014, after a trip to Australia and a strained teres major muscle behind his pitching shoulder, Kershaw striking out 18 in his first 14 innings while allowing just three runs and walking no one in two starts. He allowed more than three runs in just one of his remaining 24 starts and won Cy Young and MVP awards despite missing a month.

Since the Cy Young award was created in 1956, only two starting pitchers have won the award in non-strike years with fewer than 200 innings pitched. One was Kershaw in 2014, when he threw 198 1/3 innings. The other was Rick Sutcliffe in 1984.

With a player as amazing as Kershaw, a lot seems to be possible.

PITTSBURGH, PA – JUNE 26: Clayton Kershaw #22 of the Los Angeles Dodgers delivers a pitch in the first inning during the game against the Pittsburgh Pirates at PNC Park on June 26, 2016 in Pittsburgh, Pennsylvania. (Photo by Justin Berl/Getty Images)

Trevor Bauer Reinstated By MLB – But Will The Dodgers Keep Him?