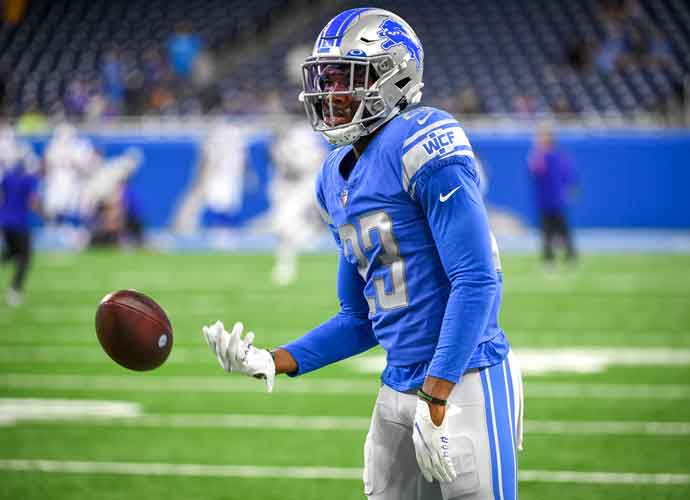 DETROIT, MICHIGAN - AUGUST 13: Jeff Okudah #23 of the Detroit Lions throws a ball before the preseason game against the Buffalo Bills at Ford Field on August 13, 2021 in Detroit, Michigan. (Photo by Nic Antaya/Getty Images)

The Detroit Lions lost on multiple fronts on Sunday – cornerback Jeff Okudah ruptured an Achilles tendon and is out for the season during Sunday’s 41-33 loss. An MRI revealed the severity of the injury Monday morning, and Lions coach Dan Campbell said he texted Okudah after the game, and plans to sit down at some point for a meeting.

As a former player who dealt with injuries, Campbell can relate to the agony of the rehabilitation process, but he’ll encourage him not to sulk about it. His message will be simple: be ready for next season. “What are you gonna do to prepare yourself for next year? That’s gonna be my whole conversation with him is that your sole focus has gotta be on 2022 and ‘how do I get back from this?'” Campbell said. “We’ll have this surgery and then everything has gotta be about the rehab again because there’s no other way to treat it. There’s no other way to react about it. That’s the only way he’s gonna get better.”

Campbell didn’t mince words about Okudah’s performance on Sunday. “I would say for Jeff, it was an up-and-down game,” Campbell said Sunday. “He flashes on a few plays, you’re like, ‘Wow. Ok, there he is.’ And then next thing you know, something happens that’s just – I don’t want to make excuses, but at the same time, he’s in Year 2. He made some young errors is what he did.”

The injury is a huge blow to Detroit’s secondary as Okudah was coming off a strong training camp. During the offseason, he completely reinvented himself and developed a tight bond with the new regime, which was looking to get the best out of him. Okudah’s rookie season was also cut short, as he appeared in nine games (starting six) before undergoing season-ending surgery on his groin. “I’ve been through a lot of adverse things, and something about me is that I really don’t regret any of it because it’s led me to where I’m at right now,” Okudah told ESPN last week. “So, I’ve been really appreciative that every time that I’ve fallen, I’ve been able to get back up.”