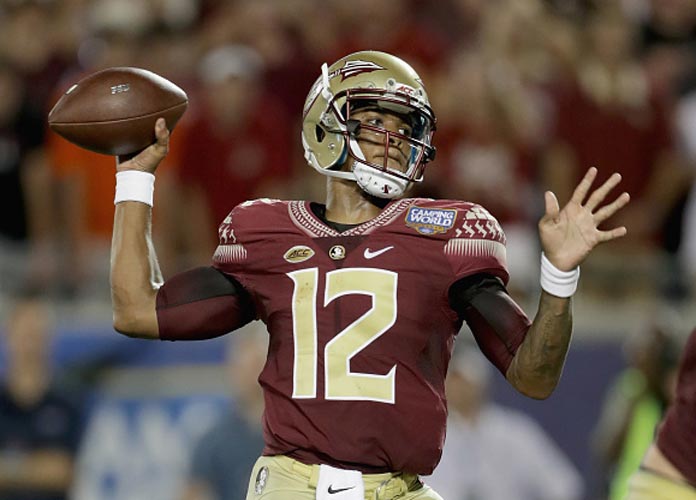 ORLANDO, FL - SEPTEMBER 05: Deondre Francois #12 of the Florida State Seminoles drops back to pass against the Mississippi Rebels during the Camping World Kickoff at Camping World Stadium on September 5, 2016 in Orlando, Florida. (Photo by Streeter Lecka/Getty Images)

In the first quarter of Monday night’s home against the Mississippi Rebels, quarterback Deondre Francois and the Florida State Seminoles appeared to struggle, and trailed by 22 points before the end of the opening quarter.

However, things began looking up for the fourth-ranked Seminoles in the second quarter, and they 45-34 season-opening victory over Ole Miss– the biggest comeback win in the school’s history– at Camping World Stadium in Orlando.

“Things weren’t going right, but I couldn’t panic because my team needed me behind the wheel,” said Francois, just the fourth freshman to start the season as the Seminoles’ quarterback.

“So I just kept chopping. We were down 28-6, but I couldn’t let them see me down, I had to portray the image that we were not about to lose this game.”

Francois completed 33 of 52 passes for 419 yards and two touchdowns, and also rushed for 59 yards. In the second quarter, he tossed a 16-yard touchdown pass to Travis Rudolph, the first of 33 straight points for Florida State.

“He’s a kid who loves his team,” FSU coach Jimbo Fisher said of Francois. “His teammates believe in him, and he’s a fighter, and he’s a competitor, which I’m very proud of.”

Francoi’s counterpart, Ole Miss QB Chad Kelly– a senior with much more experience– threw for 313 yards and four touchdowns, although he also finished with three interceptions and one fumble.

Francois, who didn’t cause a single turnover, was praised by his teammates.

“He just wants to make everything perfect, he wants to perfect his craft,” said FSU running back Dalvin Cook. “The confidence he has coming into the huddle, you have no choice but to go out and execute for him because he is going to lay it on the line for you.”

Ole Miss coach Hugh Freeze lamented the way his team played in the latter half of the game.

“Jimbo (Fisher) and I were talking before the game, there was going to be a good football team that walked out of here tonight not feeling well, and it’s us,” Ole Miss coach Hugh Freeze said. “We did not deserve to win the game the way we played the second half.”

Mississippi cornerback Ken Webster suffered a knee injury on the Rebels’ fourth defensive play when he went up to defend a pass to receiver Kermit Whitfield. Webster was carted off the field after landing awkwardly on the jump.

Ole Miss next returns home to face Wofford of the FCS on Saturday. The Terriers (1-0) are coming off a 21-7 win over Tennessee Tech.

The Seminoles will next host Charleston Southern of the FCS on Saturday. The Buccaneers (1-1) are coming off a thunderous 57-7 win over Kentucky State.

ORLANDO, FL – SEPTEMBER 05: Deondre Francois #12 of the Florida State Seminoles drops back to pass against the Mississippi Rebels during the Camping World Kickoff at Camping World Stadium on September 5, 2016 in Orlando, Florida. (Photo by Streeter Lecka/Getty Images)