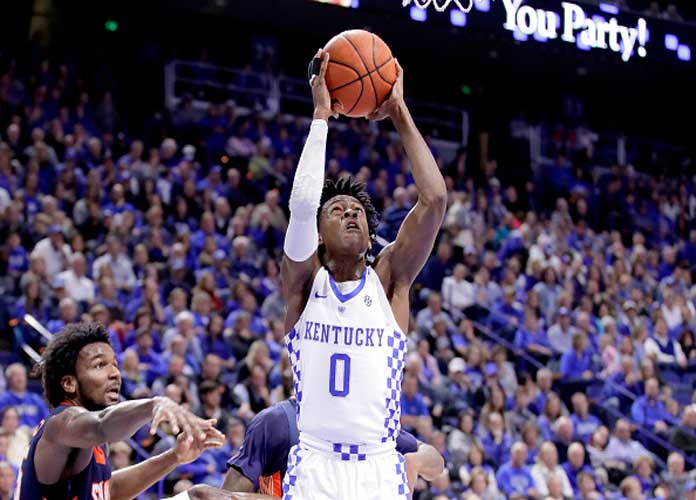 LEXINGTON, KY - NOVEMBER 25: De'Aaron Fox #0 of the Kentucky Wildcats shoots the ball during the game against the Tennessee- Martin Skyhawks at Rupp Arena on November 25, 2016 in Lexington, Kentucky. (Photo by Andy Lyons/Getty Images)

The Kentucky Wildcats routed the Arizona State Sun Devils 115-69 in the Bahamas on Monday night, and in doing so, De’Aaron Fox made history.

The freshman point guard posted the second triple-double in Kentucky history by scoring 14 points, grabbing 11 rebounds and adding 10 assists. Chris Mills had the only previous triple-double in UK history in 1988.

“I didn’t even know how long it’s been,” Fox said, “but it felt good. Honestly, it may be my most efficient game shooting-wise. So that’s what I feel good about.”

Fox made his only 3-point attempt, and scored six of nine shots in total.
Arizona State Coach Bobby Hurley, a former star point guard himself, praised Fox.
“He was on his way to [a triple-double] at halftime,” he said. “I think we had nine defensive rebounds at halftime, and he had eight. He’s really, really really talented.”
The Wildcats were already up big when Isaiah Briscoe brought down a second-half rebound, dribbled and fired an outlet pass ahead to Malik Monk.
Monk scored 23 points for Kentucky (7-0), who dominated an undersized team.
The Wildcats led by double digits roughly 6 minutes in, led 58-30 by halftime, then scored the first 12 points after the break to go up 40 with 15 minutes remaining.
“My question now when I go back will be: how now do we take this to another level?” coach John Calipari asked.
Kentucky dominated Monday’s game in just about every metric. They shot 52 percent. They finished with a 59-33 rebounding advantage. They scored 21 points off turnovers and finished with 33 assists on 44 baskets.
Five other Kentucky players joined Fox in double-digit scoring: Monk, Briscoe– who contributed 20 points and seven assists– Bam Adebayo, who had 12, Derek Willis, who had 11, and Wenyen Gabriel, who had 10.
Hurley went so far as to compare the current Wildcats to the UK team that started the 2014-15 season with 38 consecutive victories.

“I would certainly put them in the same class,” Hurley said. “They’re a little bit different. Maybe a little more perimeter-oriented, not as overall big as that team was. But how quickly the game moved, we haven’t seen anything like that.”

Calipari, however, was not yet prepared to make that comparison.

Sam Cunliffe scored 14 points for the Sun Devils (4-3), who shot just 34 percent and made 8 of 26 3-point attempts (31 percent).
The Wildcats next return home to host the No. 11 UCLA Bruins on Saturday, while the Sun Devils (4-3) will host UNLV that same day.
LEXINGTON, KY – NOVEMBER 25: De’Aaron Fox #0 of the Kentucky Wildcats shoots the ball during the game against the Tennessee- Martin Skyhawks at Rupp Arena on November 25, 2016 in Lexington, Kentucky. (Photo by Andy Lyons/Getty Images)
Read more about:
Arizona State Sun Devils De'Aaron Fox Kentucky Wildcats NCAA Basketball