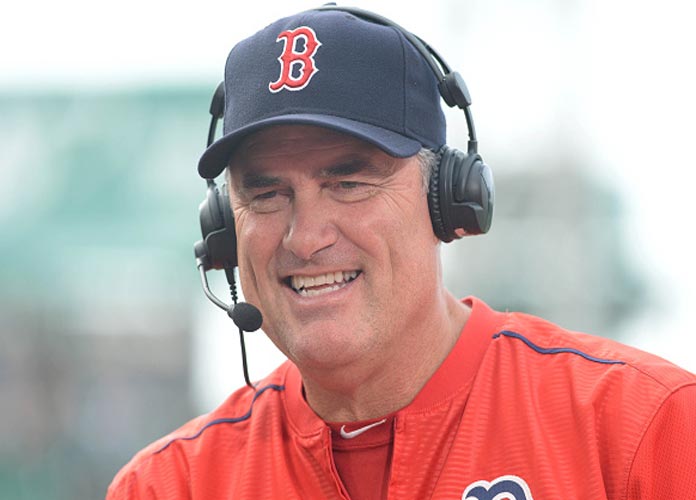 BOSTON, MA - JUNE 03: Manager John Farrell #53 of the Boston Red Sox does an interview prior to the game against the Toronto Blue Jays at Fenway Park on June 3, 2016 in Boston, Massachusetts. Toronto won the game 5-2. (Photo by Darren McCollester/Getty Images)

David Ortiz had nothing to say about John Farrell following the Boston Red Sox manager’s firing after five seasons.

The 41-year-old former slugger praised Farrell in a segment on Fox Sports on Wednesday.

“I live in Boston, and in Boston, the whole talk sometime during the year was that that was going to happen,” said Ortiz. “Managing in a big market, it’s a survive-and-advance type of job, so it finally ended up happening. I played for John, and John was a good manager to me. He kept things under control in the clubhouse. But like I said, managing in a big market is hard. It’s not an easy thing to do.”

“John was a good manager to me…managing in a big market is hard.”- @davidortiz on the Red Sox firing John Farrell pic.twitter.com/uTBb3KVG1P

Ortiz played under Farrell from 2013 to 2016. The Red Sox won the World Series in Farrell’s first year in charge, and also won three division titles during his tenure while nevertheless finishing last twice. He posted a 432-378 record in Boston, where he had one year remaining on his contract. Farrell’s victory total ranks sixth in club history.

“Despite an end to this season that we all wanted to be different, I am proud of this ball club and the resiliency shown,” Farrell said in a statement released by the Red Sox. “I have enjoyed every moment of this job — its peaks and its valleys. There are few, if any, positions in life that create so much passion on a daily basis.”

The Red Sox lost three of their four games against the Houston Astros in the American League Division Series, including a 5-4 home loss on Monday.

Cleveland Indians skipper Terry Francona, Farrell’s predecessor in Boston, said:  “I talked to Johnny today — I mean, he’s one of my dear friends. … Knowing John, the way I do, he’ll land on his feet and he’ll be in a better position than he was before,” Francona said, per Boston.com. “I do think, for whatever reason, that place is a little crazy. I think (Farrell) felt like he probably had a target on his back for a while. He said he was at peace with it. And I think he’s done some amazing things.”

General manager Dave Dombrowski said Farrell’s replacement would need to be comfortable in front of the media and relatable to the squad’s younger players.

“He gave me every opportunity to succeed,” said pitcher Chris Sale. “I can say the same for everybody on this team.”

BOSTON, MA – JUNE 03: Manager John Farrell #53 of the Boston Red Sox does an interview prior to the game against the Toronto Blue Jays at Fenway Park on June 3, 2016 in Boston, Massachusetts. Toronto won the game 5-2. (Photo by Darren McCollester/Getty Images)