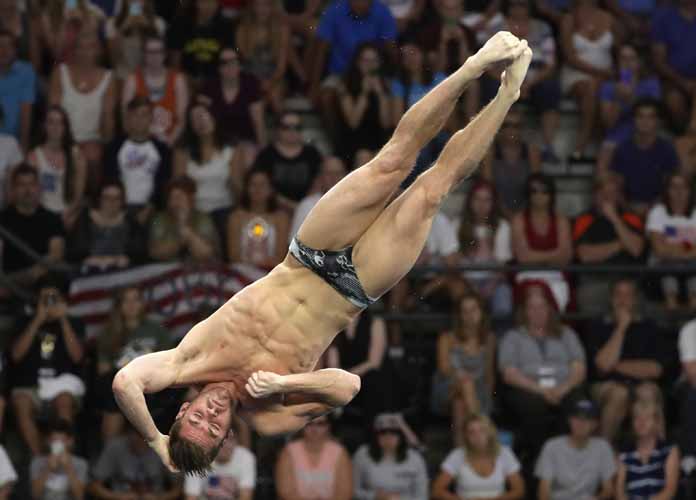 INDIANAPOLIS, IN - JUNE 26: David Boudia competes in the Men's 10m Platform final during day 9 of the 2016 U.S. Olympic Team Trials for diving at Indiana University Natatorium on June 26, 2016 in Indianapolis, Indiana. (Photo by Streeter Lecka/Getty Images)

US Olympic diver David Boudia On How He Preps… by uSports

David Boudia, a 27-year-old Olympic diver for Team USA, has qualified for the finals in Rio. He will be competing in the 10 meter individual and 10 meter synchronized dives. The men’s 10 meter synchro finals are today at 3:00 p.m. EST and he will be competing with his teammate Steele Johnson. Boudia discussed with uSports how his training regiment is different than some may expect and how mental preparation is so important for him before competition.

Boudia is honored to represent the U.S. in his third Olympics. He took home two medals in London in 2012, a gold in the 10 m individual platform and bronze in the 10 m synchronized platform. His training is unique because he spends more time preparing outside of the pool than in it.

“There’s a lot of different cross-training I do in diving. A lot of people think the focus is just inside of the pool but most of my training, I’d say 60% of it is outside the pool,” he said. “I do a lot of weightlifting, I do a lot of conditioning, I do pilates and yoga, you know, just to get that diversification just to get your body right.”

Some of his preparation doesn’t involve anything physical.

“A big portion of that is just visualizing my dives, so just closing my dives and seeing every movement that I do and it helps translate in the pool because you know once I’m up on that 10 meter platform I’m up there and I’ve already done the dive 20 times in my head so it’s just kind of on automatic pilot when you’re up there,” Boudia said.