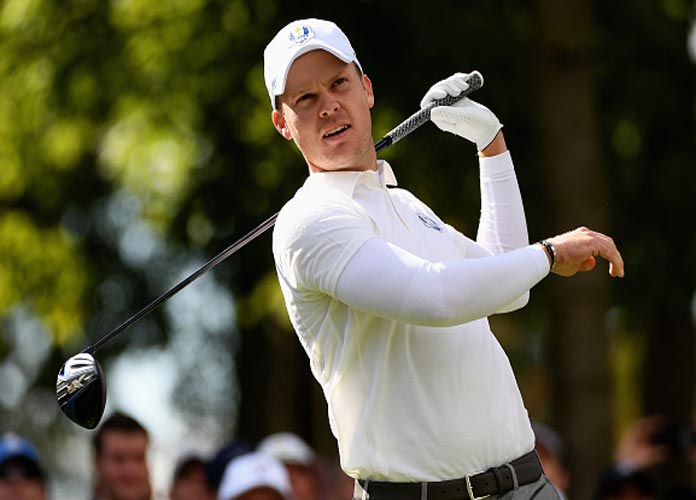 CHASKA, MN - SEPTEMBER 29: Danny Willett of Europe plays a tee shot during practice prior to the 2016 Ryder Cup at Hazeltine National Golf Club on September 29, 2016 in Chaska, Minnesota.

Masters champion Danny Willett has apologized following the publication of an article written by his brother that describes American Ryder Cup fans as a “braying mob of imbeciles.”

The Englishman, who will be 29 on Monday, won the Masters in Augusta, Georgia, in April. His brother, schoolteacher Peter Willett, penned a column for National Club Golfer magazine and stated his blunt opinions on what each team needs to do in order to secure victory at the Ryder Cup, which will be held at Hazeltine National Golf Club in Chaska, Minnesota, beginning Friday.

Danny Willett was made aware of the article during Wednesday’s practice round at Hazeltine and later told the Golf Channel: “I’ d just like to apologize obviously to everyone involved for what’s been said.

“It’s obviously not the thoughts of myself and of the team and of captain Darren (Clarke). I spoke to him (Pete) on the phone after I was made aware of what was said and what has been going on.

“And I said to Pete that I was obviously disappointed in what was said and what was written about the American fans that obviously took me under their wing fantastically back in April (at the Masters).”

Willett also apologized in person to US captain Davis Love, adding: “He took it very well and I think he’s drawn a line under it for himself and for the team. So hopefully everyone else can do the same and hopefully we can get on and have a great tournament.

“I got made aware after a few holes today, it was obviously going crazy. It is tough to then concentrate, because you don’t want people to think badly of yourself. You kind of wanted to get off the golf course and hopefully get it sorted, hopefully draw a line under it and get back to what we’re doing.”

Clarke had previously expressed his own disappointment with the article, saying:

Love, however, said he had no desire to even read the article, saying he would just get mad if he did. Thus, the US captain ignored it.

The article severely criticized and mocked US fans, and the backlash of its statements remains to be seen as the Ryder Cup begins this weekend.

It read: “They (Europe) need to silence the pudgy, basement-dwelling, irritants, stuffed on cookie dough and p**** beer, pausing between mouthfuls of hotdog so they can scream ‘Baba booey’ until their jelly faces turn red. They need to stun the angry, unwashed, Make America Great Again swarm, desperately gripping their concealed-carry compensators and belting out a mini-erection inducing ‘mashed potato,’ hoping to impress their cousin.

“Darren Clarke needs to pick his pairs carefully, they need to support each other intelligently, and the crowd needs to be dealt with swiftly.

“If these things happen, Europe will win, and I’ll try to support gracefully by embracing the same sense of fair-mindedness that has permeated this unbiased article. If not, the Americans will claim their second victory this century… those fat, stupid, greedy, classless, b*******.”

CHASKA, MN – SEPTEMBER 29: Danny Willett of Europe plays a tee shot during practice prior to the 2016 Ryder Cup at Hazeltine National Golf Club on September 29, 2016 in Chaska, Minnesota. (Photo by Ross Kinnaird/Getty Images)