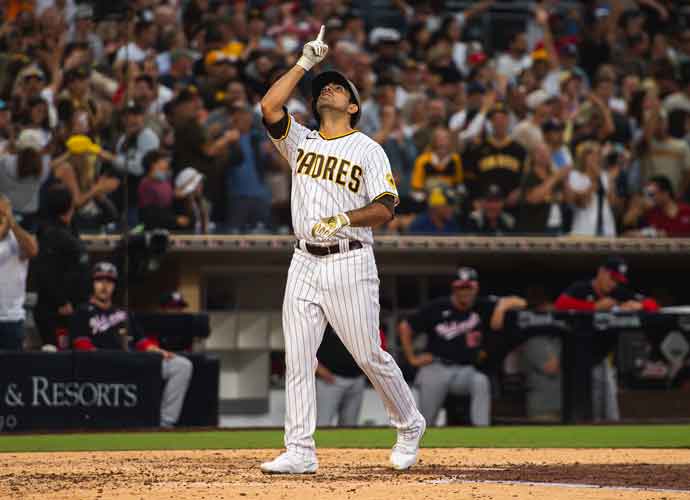 San Diego Padres relief pitcher Daniel Camarena had one of the most memorable first career hits on Thursday.

Camarena was at the plate in his second plate appearance against the Washington Nationals in the bottom of the fourth inning, his team down 8-2. With the bases loaded, Camarena stared down Nationals’ star pitcher Max Scherzer. Any batter in the situation would feel immense pressure with the bases loaded against a three-time Cy Young award winner. However, Camarena surprised many and delighted fans when he hit a grand slam off Scherzer.

Daniel Camarena is the first relief pitcher to hit a grand slam since 1985 🤯#PitchersWhoRake pic.twitter.com/1xlItHGLqE

Camarena’s first career hit was a grand slam. “Oh my God, I blacked out,” the rookie said of his home run. “I hit first base, and then all of a sudden I noticed the lights were flashing in the stadium, and that’s when it kind of hit, like, Oh my God I just hit a home run. Not only that, a grand slam.”

He became the second pitcher in MLB history whose first hit was a grand slam. Camarena was the first relief pitcher to hit a grand slam since Don Robinson did it for the Pittsburgh Pirates in 1985. Camarena is the first Padre to produce a grand slam with his first hit.

“Down 8-0 to Max Scherzer, and our ace goes out of the game,” Padres manager Jayce Tingler said. “We get a grand slam from a pitcher just called up today, probably at the top. It’s special, and that’s why I’m confident we’re going to do special things. Just because of the way we fight and we don’t lay down, we just keep going.”