Dak Prescott Makes A Name For Himself On Cowboys Roster - uSports.org 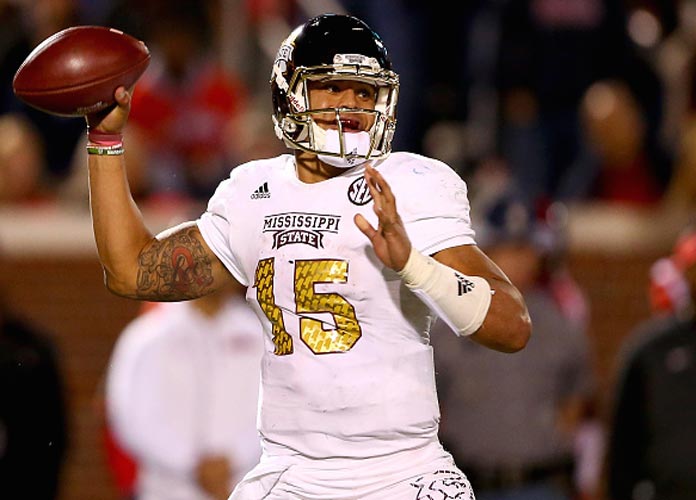 OXFORD, MS - NOVEMBER 29: Dak Prescott #15 of the Mississippi State Bulldogs drops back to pass during their game against the Mississippi Rebels at Vaught-Hemingway Stadium on November 29, 2014 in Oxford, Mississippi. (Photo by Streeter Lecka/Getty Images)

Dak Prescott Makes A Name For Himself On Cowboys Roster

Tony Romo hasn’t started in a pre-season opener since 2012 in an effort to keep him fresh and ready for the regular-season opener. Preseason is prime time for the Cowboys backup quarterbacks to show who’s ready for the first officer spot.

Prescott was chosen in the fourth round, 135th overall by the Cowboys in the 2016 draft. According to ESPN Prescott had prepared for each preseason practice as it was a game and was ready to show off his hard work, he said.

“I just basically wanted to do what I’ve been doing at practice,” Prescott said.

According to SportsDay Dez Bryant said there was no question about Prescott’s leadership skills.

“He was running the show,” Bryant said. “He was leading. It was his huddle.”

Prescott completed 10 of 12 for 139 yards and two touchdowns in one half, his only incompletions came on drops. He has a higher QB rating than any of the quarterbacks drafted higher than him in 2016, a rating of 154.5.

To the Cowboy’s credit they have one of the best offensive lines in the NFL and made sure Prescott had the best protection, giving him time and space to make the plays.

The Cowboys were in the market for a back-up quarterback after Kellen Moore broke his fibula and will be out for three to four months of the season. Dallas thought of signing Nick Foles or trading for Josh McCown, but Foles ended up with the Kansas City Chiefs and McCown was going to cost more than the Cowboys were willing to spend.

Cowboy’s running back Lucky Whitehead started the game off with a 101 yard kick return and a ten-yard touchdown catch from Bryant putting Dallas up 14-7 at the end of the second quarter. The Cowboys led all the way until the fourth when Ram’s third string quarterback Sean Mannion led a 74-yard 11-play scoring drive that culminated with a nine-yard pass to Aaron Green for a touchdown.

The first pick in the NFL draft Jared Goff entered the game in the second quarter for the Rams. He completed four of nine passes for 38 yards and was sacked once. Comparatively speaking, Goff’s rating after this game is 17.1.

Despite the difference in performance between the rookie quarterbacks the Rams came away victorious. Rams quarterback Case Keenum will be at the starting spot, Keenum completed six of seven passes for 58 yards and led the Rams to one touchdown. Rams’ Second year vet, Mannion, completed 18 of 25 for 147 yards and three touchdowns in the second half.

OXFORD, MS – NOVEMBER 29: Dak Prescott #15 of the Mississippi State Bulldogs drops back to pass during their game against the Mississippi Rebels at Vaught-Hemingway Stadium on November 29, 2014 in Oxford, Mississippi. (Photo by Streeter Lecka/Getty Images)