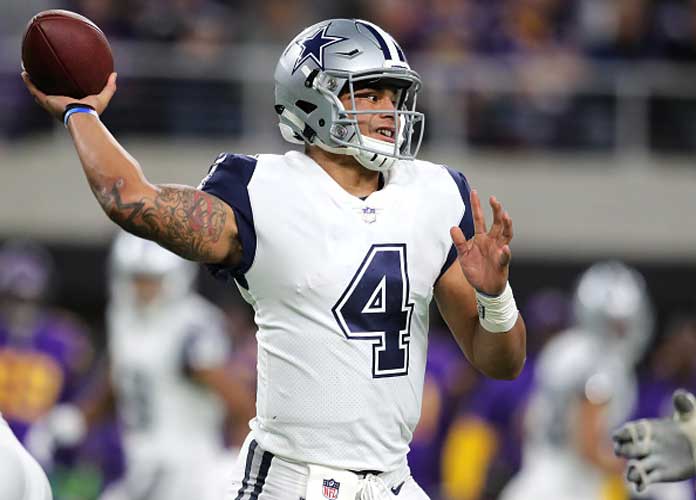 Dak Prescott #4 of the Dallas Cowboys drops back to pass the ball (Image: Getty)

A postgame question to the signal-caller initially indicated that fans were throwing things at the team in anger, which he called “sad.” When corrected and told the objects were directed towards the officials, he said, “Credit to them then. Credit to them.”

He stood his ground at the end of the conference and didn’t attempt to put the toothpaste back in the tube—until now.

On Tuesday, he tweeted three times to his 1.4 million followers to apologize:

“I deeply regret the comments I made regarding the officials after the game on Sunday. I was caught up in the emotion of a disappointing loss and my words were uncalled for and unfair.

“I hold the NFL Officials in the highest regard and have always respected their professionalism and the difficulty of their jobs. The safety of everyone who attends a game or participates on the field of a sporting event is a very serious matter.

“That was a mistake on my behalf, and I am sorry.”

That was a mistake on my behalf, and I am sorry.

A (perhaps now former) finalist for the NFL’s Walter Payton Man of the Year award, Prescott took criticism from media and the NBA Referees Association, which posted on its official Twitter account Tuesday: “The NBRA condemns the comments by Dak Prescott condoning violence against game officials. As an NFL leader, he should know better. We encourage the NFL to take action to discourage this deplorable behavior in the future.”

The NBRA condemns the comments by Dak Prescott condoning violence against game officials. As an NFL leader, he should know better. We encourage the NFL to take action to discourage this deplorable behavior in the future.

“That is just unfortunate,” Cowboys executive vice president Stephen Jones said. “That is not the way I see our fans. I think we’re a class act. I think there is no place for things like that. Understand people being frustrated, but I don’t understand throwing things onto the field where people could get injured. There’s just no place for that.”

DeMarcus Lawrence Agrees To New Deal To Stay In Dallas