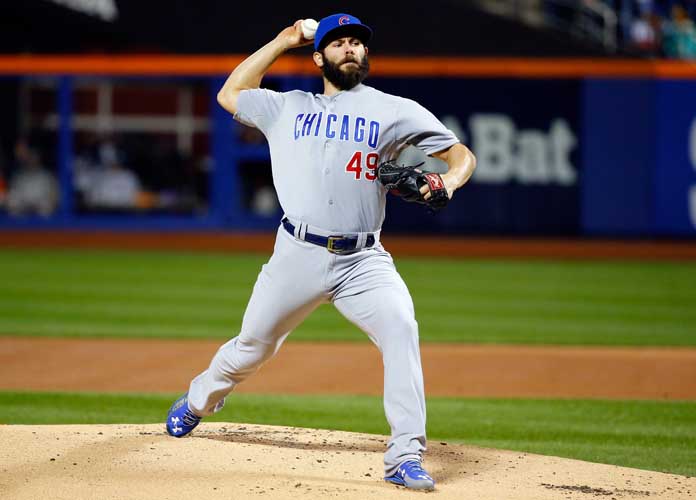 NEW YORK, NY - OCTOBER 18: Jake Arrieta #49 of the Chicago Cubs throws a pitch in the first inning against the New York Mets during game two of the 2015 MLB National League Championship Series at Citi Field on October 18, 2015 in the Flushing neighborhood of the Queens borough of New York City. (Photo by Al Bello/Getty Images)

Jake Arrieta suggested on Wednesday that he’s worth more than the $175 million deal right-handed pitcher Stephen Strasburg recently signed with the Washington Nationals, and added he’s not prepared to give his team, the Chicago Cubs, the so-called “hometown discount.”

“I’ll let you judge that,” Arrieta told reporters Wednesday morning, according to ESPN’s Jesse Rogers when asked what he believes his market value to be. “Just look at the numbers.”

Arrieta, 30, also pointed out that “aces get seven years,” seemingly hinting he considers himself one. Strasburg, who inked his seven-year extension with the Nationals on Tuesday, has never had a sub-3.00 ERA over a full season of starts, though he’s 5-0 with a 2.76 mark right now.

Reigning National League Cy Young Award winner Arrieta, meanwhile, has seen his ERA improve dramatically over his three seasons with the Cubs, going from 3.66 in 2013 to 2.53 in 2014 to 1.77 last season, during which he won the award and posted a 22-6 record. That trend has continued so far this season, as he’s gotten off to a 6-0 record with a 1.13 ERA.

“That’s why starting pitching is so valuable,” said Arrieta, whose agent is Scott Boras, who also represents Strasburg. “There’s not many guys that can pitch at the top of the rotation floating around the league.”

Arrieta is set to earn $10.7 million this season and has one year left of arbitration. He can become a free agent after the 2017 season. Once the Cubs and Arrieta begin discussing a new deal, this deal is expected to be well above what Strasburg received from the Nationals, perhaps in the $200 million range.

Cubs president Theo Epstein acknowledged that the Strasburg deal will have an impact on any potential contract talks with Arrieta, whenever such discussions would occur. Arrieta has stated he would be fine with contract talks in-season while insisting he’d be able to remain focused on baseball even if negotiations were to occur.

Arrieta’s comparables are more likely to be David Price (7 years, $217 million) or Max Scherzer (7 years, $210 million), who is also a Boras client. Both won the Cy Young Award before signing huge free-agent deals with the Boston Red Sox and the Nationals, respectively.

“Most of the focus has to stay on what we’re trying to accomplish today,” he said. “If we keep winning, those kinds of things work themselves out in time. If they want to talk, they know where I’m at and we can get something going …

“In a perfect world, I prefer it be done quickly. Let’s get it over with and go play.”

PHOTO: NEW YORK, NY – OCTOBER 18:  Jake Arrieta #49 of the Chicago Cubs throws a pitch in the first inning against the New York Mets during game two of the 2015 MLB National League Championship Series at Citi Field on October 18, 2015 in the Flushing neighborhood of the Queens borough of New York City.  (Photo by Al Bello/Getty Images)