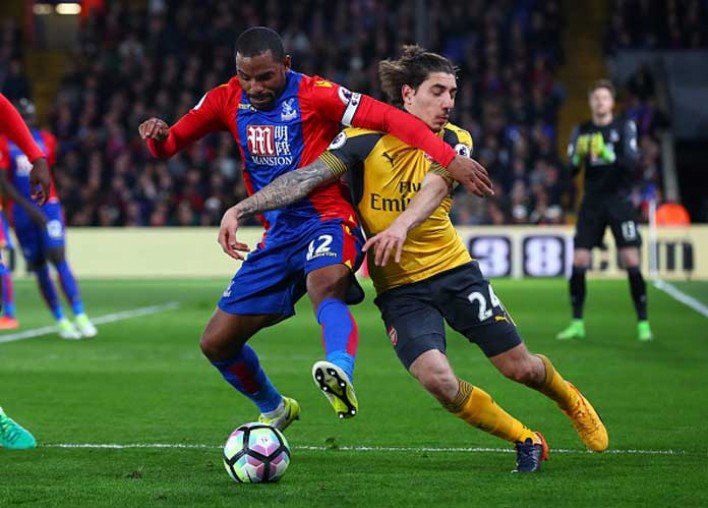 Crystal Palace continued their recent surge to increase their Premier League survival hopes with a 3-0 home victory over Arsenal at Selhurst Park on Monday afternoon.

Crystal Palace are 16th with 34 points, but have now won five of their last six games. The club, led by former England manager Sam Allardyce, had previously lost to Arsenal 15 times in the league.

Andros Townsend scored the hosts’ first goal from close range in the 17th minute, and then assisted, along with fellow winger Wilfried Zaha, on Palace’s second goal, which Yohan Cabaye scored with a brilliant shot in the 63rd minute.

Despite holding 72 percent possession against Palace, Arsenal only managed one shot on goal in their lackluster second half. Palace goalkeeper Wayne Hennessey only needed to make saves from Mohamed Elneny and Alexis Sanchez.

Arsenal was missing French captain Laurent Koscielny due to injury, and clearly suffered from this loss, particularly on defense where Koscielny plays.

“Palace wanted it more. You could sense that from the kick-off,” Theo Walcott, Arsenal’s stand-in captain, said.

Arsenal have eight games left this season. Many fans have called for Wenger to be replaced as the team’s manager. The 67-year-old Frenchman has been in charge of Arsenal since 1996, and since then has led the Gunners to top-four finishes in each of his previous 20 seasons.  Wenger’s contract expires at the end of this season, though he has not yet signed a new deal. Monday’s loss marked Arsenal’s fourth straight away defeat, the first time this has ever occurred under Wenger.

Crystal Palace will seek to get the final win Allardyce believes they need to keep their Premier League chances alive when they next host Leiceser City on Saturday morning.

Arsenal next travel to Middlesbrough on Monday.

LONDON, ENGLAND – APRIL 10: Jason Puncheon of Crystal Palace tussles with Hector Bellerin of Arsenal during the Premier League match between Crystal Palace and Arsenal at Selhurst Park on April 10, 2017 in London, England. (Photo by Clive Rose/Getty Images)
Click here for the Slideshow