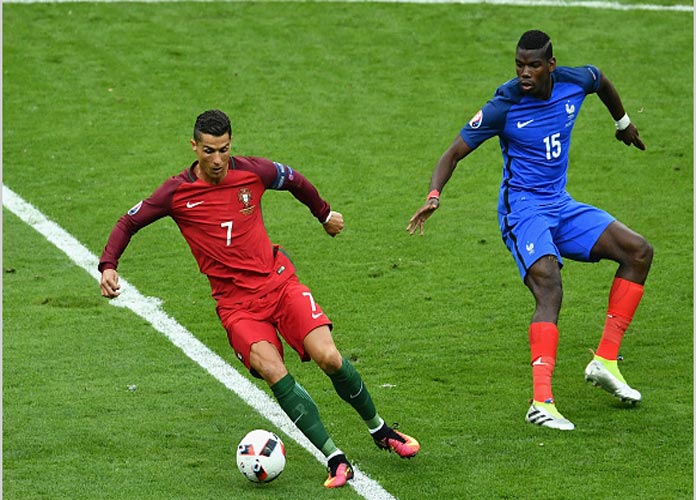 PARIS, FRANCE - JULY 10: Cristiano Ronaldo of Portugal controls the ball under pressure from Paul Pogba of France during the UEFA EURO 2016 Final match between Portugal and France at Stade de France on July 10, 2016 in Paris, France. (Photo by Dan Mullan/Getty Images)

Cristiano Ronaldo has made his way even further into the history books thanks to a fantastic opening World Cup performance on Friday. Ronaldo recorded a hat trick, accounting for all 3 of Portugal’s goals in a 3-3 draw against Spain.

As remarkable as it is on its own, this particular hat trick holds some historical weight, as Ronaldo’s 82nd, 83rd, and 84th international goals tied him for the most goals ever scored by a European player in international play. His mark puts him even with Ferenc Puskas, who played for the Hungarian national team from 1945 to 1956. Puskas is also the namesake of FIFA’s Goal of the Year Award. At 33-years-old, Ronaldo also became the oldest player to ever record a hat trick in the World Cup.

Ronaldo now needs another 25 goals in order to tie Ali Daei’s record for most international goals all time by a player from anywhere in the world, as his 109 goals scored for Iran from 1993-2006 makes for the highest mark in history. And just an extra little fun fact: Ronaldo is now the fourth player in history to score a goal in 4 different World Cups, joining the likes of Pele, Uwe Seeler and Miroslav Klose.

Friday’s hat trick was the 51st of Ronaldo’s career in both international and club play, but it was the only one which didn’t result in his team’s victory. Ronaldo was not disparaged by the result, though, as he indicated that there is plenty more soccer (or football, in this case) to be played. He said, “It was a good result. We sacrificed a lot but we believed in ourselves right to the end. This is just the first match. It was a very difficult game.”

We’ll see how Ronaldo follows up this performance when Portugal takes on Morocco on Wednesday, June 20 at 8:00 am EST.