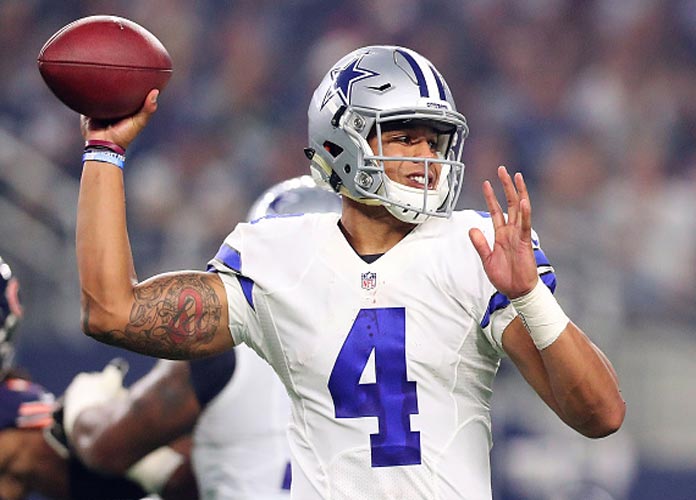 ARLINGTON, TX - SEPTEMBER 25: Dak Prescott #4 of the Dallas Cowboys throws during a game between the Dallas Cowboys and the Chicago Bears at AT&T Stadium on September 25, 2016 in Arlington, Texas. (Photo by Tom Pennington/Getty Images)

In his first game in 11 months, Dak Prescott did not disappoint. The Cowboys QB shined in the NFL season opener against the Tampa Bay Buccaneers. Prescott threw for 403 yards and 3 touchdowns in the contest, putting to rest any concern over whether he’d resume playing at the same level before getting hurt. His play was not enough to bring the Cowboys to victory, as Tom Brady commanded a game-winning drive in the last minute of the game, capped by a go-ahead field goal with five seconds remaining.

Despite the loss, Cowboys fans should feel very pleased about their QB’s first performance since his ankle surgery. Prescott asserted his commitment to holding himself to a high standard during the postgame conference.

“I think when you invest that much work in rehab and prehab and just everything that has gone into the last 11 months for me to get on the field, I mean, I’m not surprised about the way that I went out there and fought. Ran the ball a couple times and did all the things that I’d normally do 11 months ago. No, I feel like I’m a better player than I was when I left the field [last year] and I told y’all that was the expectations I had for myself, and I’ll continue to try to get better game in and game out.”

Prescott also went into depth about all the aspects of the game that he had missed.

“I enjoyed every moment of that game. Honestly, this whole trip, there’s been multiple moments that I’ve taken in and just missed the bus ride, missed the warm-ups, missed the fans, missed so much about the game that brings me so much joy. Being down in a game two points and knowing you’re going to have an opportunity to go back out there and play. Just that resiliency — missed that. Missed that feeling that sparks up in me and the fire that it had. There wasn’t a part of this game or moment I took for granted.”