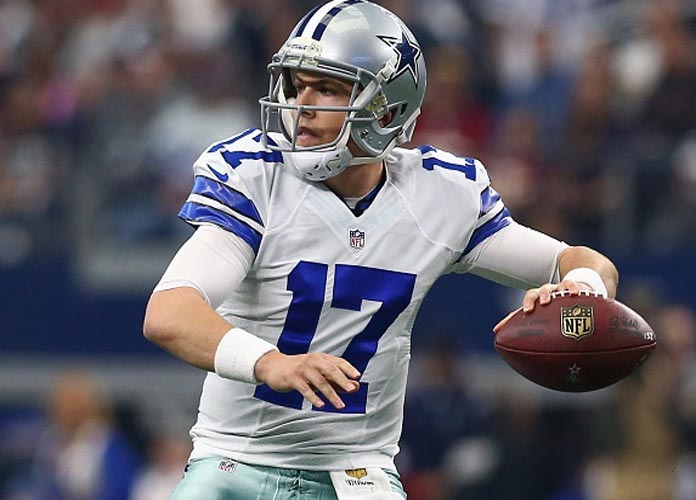 ARLINGTON, TX - JANUARY 03: Kellen Moore #17 of the Dallas Cowboys throws against the Washington Redskins during the first half at AT&T Stadium on January 3, 2016 in Arlington, Texas. (Photo by Tom Pennington/Getty Images)

According to ESPN, Moore broke his right fibula and will probably be out 3-4 months after undergoing surgery.

The injury occurred when a defender rolled up on Moore’s leg after the QB threw a pass. Brandon George of the Dallas Morning News reported that left guard Jared Smith stepped on the Moore’s ankle, causing the injury.

“It’s regrettable, and we’ll basically just take a look at it and address it there,” Jones said. “I don’t have any comments about what, if anything, we’ll be doing there.”

Kellen Moore has broken his leg/high ankle, according to Jerry Jones. Declined to address what club will do moving forward.

Moore’s injury obviously creates problems for Dallas’ quarterback lineup, as he was supposed to be Tony Romo’s backup this season. The fifth-year pro threw for 779 yards with four touchdowns and six interceptions in his career, all last season in three games, including starts in the Cowboys’ final two games of the season. He was signed by the Detroit Lions–with whom he spent three seasons– as an undrafted free agent from Boise State in 2012.

Per ESPN’s Ed Werder, the Cowboys are considering free agent Nick Foles, who was recently released by the Los Angeles Rams, to replace Moore. The team is also reportedly exploring trades for Cleveland Browns veteran quarterback Josh McCown and Tampa Bay Buccaneers backup Mike Glennon. For the time being, Prescott and Jameill Showers could also serve as secondary options. Jones had previously stated the team wasn’t interested in Foles.

“We wouldn’t be able to give (Foles) any snaps,” Jones said last Friday. “We’ve got four that are going to get snaps.”

Romo suffered several collarbone injuries last year, and it wasn’t the first time in his career he’s dealt with that type of problem. The Cowboys went 1-11 in games that weren’t started by Romo last year.

ARLINGTON, TX – JANUARY 03: Kellen Moore #17 of the Dallas Cowboys throws against the Washington Redskins during the first half at AT&T Stadium on January 3, 2016 in Arlington, Texas. (Photo by Tom Pennington/Getty Images)