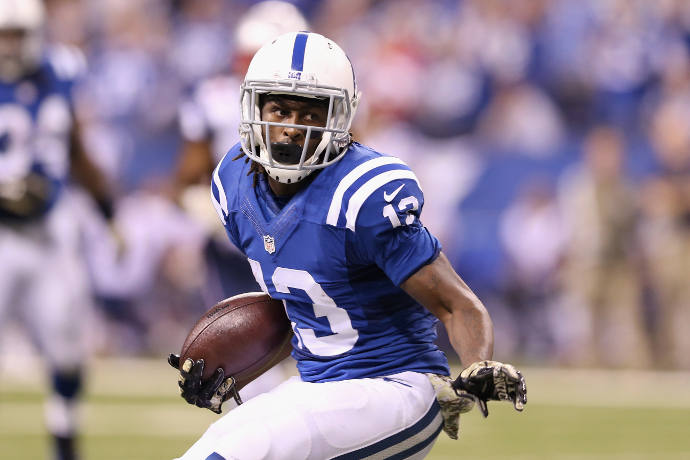 during the game at Lucas Oil Stadium on November 16, 2014 in Indianapolis, Indiana.

It seems the Indiana Colts want a Super Bowl ring this season, as Andre Luck will not have to rely on luck to find his new wide receiver, T.Y. Hilton after a new contract extension.

In a five-year extension worth $65 million with $39 million guaranteed running through 2020, the Colts will now have an explosive passing option. He broke the 1000 yard mark in 2013, but during the 2014 season, he had 1345 yards on 82 receptions and seven touchdowns in only 15 games.

In a statement to the press, Colts general manager Ryan Grigon said that,”It’s a great day for the Indianapolis Colts, T.Y. Hilton and his family. We’re extremely happy as an organization to ensure that T.Y. will continue to be a part of our journey for many years to come. His daily excellence on and off the field is a shining example of an individual striving for greatness and what it truly means to be a Colt.”

And it isn’t just management that’s happy, fellow teammates took to Twitter to congratulate him.

Prior to the extension, Hilton had the contract on his mind, but as a player, that wasn’t his main concern, and he didn’t allow it to worry him. He told Steve Andress of Colts.com that:

For me, I’m just going out here and having fun. That’s between my agent, the Colts and whatever they decide to do. I’m just out here having fun, bonding with my teammates, and just continue to get better. For me, you want to get it out of the way, but it’s nothing I can do. Control what I can control.

Indianapolis has always had a good quarterback in Peyton Manning, but even he had Marvin Harrison to feed off of. The question now is, will Luck and Hilton be the next Peyton and Harrison?