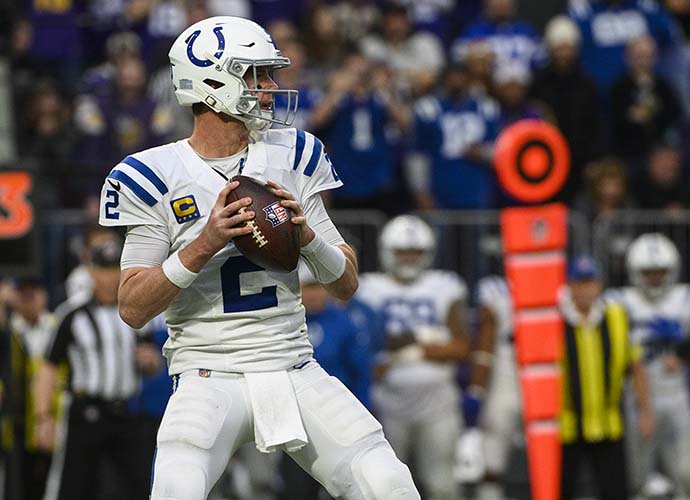 MINNEAPOLIS, MN - DECEMBER 17: Matt Ryan #2 of the Indianapolis Colts looks to pass the ball in the fourth quarter of the game against the Minnesota Vikings at U.S. Bank Stadium on December 17, 2022 in Minneapolis, Minnesota. (Photo by Stephen Maturen/Getty Images)

The Indianapolis Colts’ announcement last Wednesday that quarterback Nick Foles would start in the team’s Week 16 game against the Chargers felt like more of a surrender than anything else. Former Falcons star Matt Ryan headed to the bench for the second time this season under his second head coach, now having been replaced by two different quarterbacks. The Colts lost 20-3.

At the beginning of the season, Ryan’s move to Indianapolis spelled promise for a Colts franchise that had slowly been improving over the course of the 2021 season. He has not come close to fulfilling the role of savior since, however. Through 12 starts, he ranks 14th in passing yards, 20th in touchdowns and 25th in quarterback rating.

Following a particularly ugly loss to the Titans in Week 7, former head coach Frank Reich benched Ryan ahead of Week 8 in favor of rookie Sam Ehlinger, who only lasted two weeks before sustaining an injury. Reich was fired soon after and replaced by interim head coach Jeff Saturday, who reinstated Ryan as the starter until Week 15.

Foles’ reputation as a backup maintains a mythical quality because of his work on the Philadelphia Eagles in the 2017 season when he stepped in for Carson Wentz and led the playoff-bound team to a Super Bowl victory. This run in Indianapolis will likely be far less romantic, however, as his first start against Los Angeles resulted in an anemic 20-3 defeat. The Colts have been eliminated from playoff contention and will have to carry on without star running back Jonathan Taylor, who suffered a season-ending injury last week.

As the Colts limp through the end of a season that once seemed to hold serious potential, it’s impossible to assess the source of the team’s dysfunction without pointing to Ryan. Once a dynamic passer in Atlanta for a perennially productive offense, the 37-year-old simply has not shown the same ability in Indianapolis.

In many ways, the Colts’ offseason cannot come fast enough, as their running back needs time to recuperate while they search for a permanent head coaching replacement. Only then will they be able to reassess the quarterback position and resume a rebuild that has suffered countless setbacks since Andrew Luck’s departure in 2018.