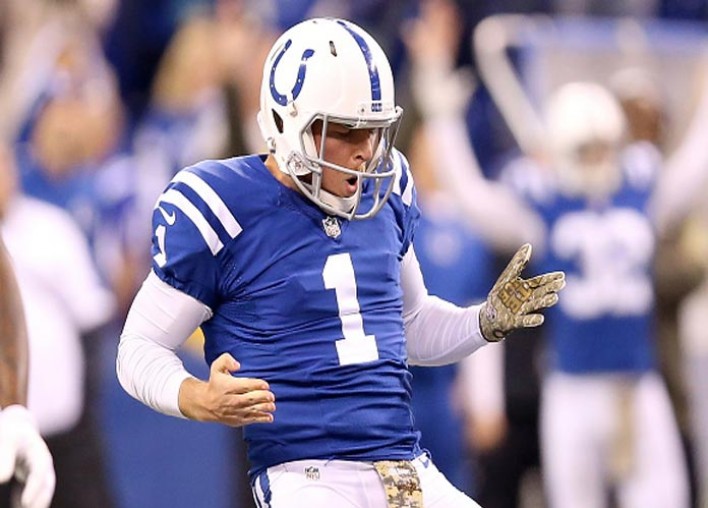 INDIANAPOLIS, IN - NOVEMBER 08: Pat McAfee #1 of the Indianapolis Colts celebrates after the 55 yard field goal by Adam Vinatieri during the game against the Denver Broncos at Lucas Oil Stadium on November 8, 2015 in Indianapolis, Indiana. (Photo by Andy Lyons/Getty Images)

Indianapolis Colts owner Jim Irsay and recently-retired punter Pat McAfee announced on Twitter Wednesday morning that they will be making a donation to nearly double the reward fund for two teens murdered in Delphi, Indiana.

In the posted video, 29-year-old McAfee — who announced his retirement Super Bowl week — referred to himself as a “Hoosier for life,” and said the reward fund is now at $200,000.

IN State Police Superintendent told me “We need the pic/audio file 2 be seen, some1 knows something”.. So..Internet, $200,000 reward #LetsGo pic.twitter.com/vsTOP4WLQM

The bodies of the two girls– 14-year-old Liberty German and 13-year-old Abigail Williams– were discovered on Feb. 14 near Deer Creak in Carroll County. The pair had been out walking on a day off from school.

“We are calling on you,” McAfee said in the video, urging people to listen to an audio clip and view the photo of the man police have named their prime murder suspect.

Investigators say they’re working hard to follow up on every potential lead with 500 new tips coming in just from Monday to Tuesday night. The total number of tips has now surpassed 9,300.

If you have any information on this case, call the Delphi tip-line at (844) 459-5786 or email abbyandlibbytip@cacoshrf.com.

McAfee also confirmed in an interview on ProFootballTalk Live on Wednesday that he will not be making a comeback in the NFL, opting instead to pursue a job at sports blog Barstool Sports, which the former punter claims “everyone” thought was a joke.

McAfee cited pain in his knees, on which he’s had three surgeries, as his main reason for quitting football.

“My knees have just gotten to the point where they just get beat up,” McAfee said. “I played soccer my whole life, I’m kind of a heavier person, and whenever you kick and punt, no matter how limited an activity it is, my brain and shoulders are going to be OK because I didn’t play a tough guy position, but my knees took a lot of wear and tear from the kicking.”

INDIANAPOLIS, IN – NOVEMBER 08: Pat McAfee #1 of the Indianapolis Colts celebrates after the 55 yard field goal by Adam Vinatieri during the game against the Denver Broncos at Lucas Oil Stadium on November 8, 2015 in Indianapolis, Indiana. (Photo by Andy Lyons/Getty Images)