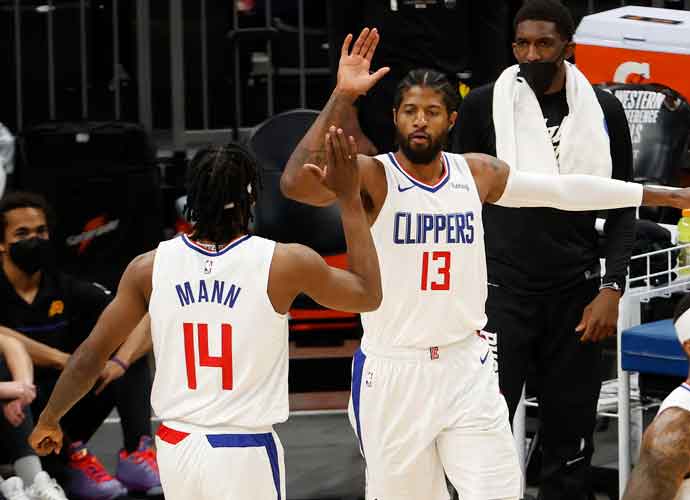 PHOENIX, ARIZONA - JUNE 28: Paul George #13 of the LA Clippers celebrates with Terance Mann #14 during the first half in Game Five of the Western Conference Finals against the Phoenix Suns at Phoenix Suns Arena on June 28, 2021 in Phoenix, Arizona. NOTE TO USER: User expressly acknowledges and agrees that, by downloading and or using this photograph, User is consenting to the terms and conditions of the Getty Images License Agreement. (Photo by Christian Petersen/Getty Images)

The Western Conference finals will see Game 6! Paul George scored a playoff career-high 41 points to help the Los Angeles Clippers stave off elimination in Phoenix on Monday night. Game 6 will now shift back to Los Angeles on Wednesday.

After the thrilling game, George was asked if he’s picked on more than other stars across the NBA. “I do,” George answered. “And it’s the honest truth. It’s a fact. But I can’t worry about that. It comes with the job, I guess… I still try to go and dominate… And so I’m beyond that, you know what I mean. I am who I am. I wish I could shoot 80%, 75%, on a nightly basis, but it’s not realistic. What I can do is do everything else,” he added. “They can judge me on what they want to. That part don’t matter to me. I’m going to go out there and hoop and give it everything I got.”

The Clippers showed true grit and determination during this Game 5 victory. They were already down star forward Kawhi Leonard (sprained right knee), and they had just learned they’d be without starting center Ivica Zubac (sprained right MCL). Most teams would fold under this immense pressure, but not the Clippers. In Zubac’s place, Marcus Morris Sr. started at center and had his best game of the series, hitting his first six shots and scoring 13 of his 22 points in the first quarter. The Clippers jumped out to a 20-5 lead in the opening minutes. That allowed George to feel his way into the game, according to coach Tyronn Lue.

Teammate Demarcus Cousins was also quick to give his props to George after the game. “I don’t know where this trolling bulls— has come from where the internet controls the narratives about these players,” he said. “It’s becoming foolish, man. Like I said earlier in the year, [George is] one of the most special players to ever lace his shoes up. Give this dude his flowers, man. I don’t understand the slander. It’s becoming quite silly now. Respect these players, man. Respect these greats.”

Cousins is completely on point about hyping up his teammate. George shot an unbelievable 10-of-14 on contested shots. He did a lot of his damage on pull-ups, going 7-for-10 on those shots, according to ESPN Stats & Information research. And he scored on seven different primary Suns defenders. “If they were going to finish this series off, they were going to have to work for it,” George said. “That was just the mentality we came into this with. We weren’t going to back down. We weren’t going to just throw in the towel. The fact of the matter is, they got to beat us.”