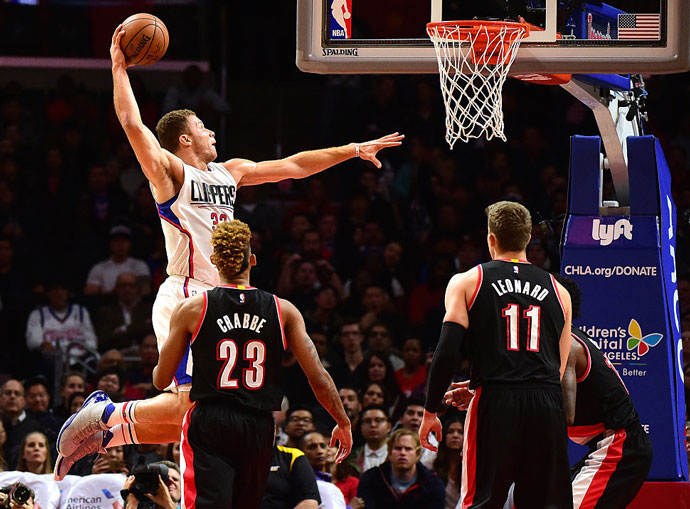 Caption:LOS ANGELES, CA - NOVEMBER 30: Blake Griffin #32 of the Los Angeles Clippers dunks past Allen Crabbe #23 and Meyers Leonard #11 of the Portland Trail Blazers during the first half at Staples Center on November 30, 2015 in Los Angeles, California.

Los Angeles Clippers star forward Blake Griffin has publicly apologized following a weekend incident that has forced him to remain out for an additional four to six weeks.

Merely hours after the team confirmed that Griffin had broken a bone in his right hand while punching Clippers assistant equipment manager Matias Testi Saturday night in Toronto, Griffin apologized for his behavior on Twitter on Tuesday night:

“A situation among friends escalated and I regret the way I handled myself towards someone I care about,” Griffin wrote. “I want to apologize to the Clippers organization, my teammates and the fans for creating a distraction. I am working with the team on a resolution and getting back in the game as soon as possible.”

The Clippers were playing in Toronto as part of a five-game road trip. The day after the incident, they lost to the Raptors 112-94.

Sources told ESPN’s Michael Eaves that Griffin and Testi were at a restaurant when they got into a heated argument and traded insults. Griffin hit Testi, who then left the restaurant, and Griffin followed him and punched him again in the face, leaving Testi with visible injuries.

Following the incident, both men were sent home. Sources said the two are good friends and have vacationed together.

The Clippers said Griffin had X-rays on the hand he used Monday in Los Angeles and underwent a procedure to repair “a spiral fracture of the fourth metacarpal” on Tuesday.

Griffin had been out since Christmas Day due to a quadriceps injury, which he suffered during the Clippers’ win that day over the Los Angeles Lakers.

Griffin was previously charged with one count of misdemeanor battery in November 2014 after allegedly getting into an altercation with a man at a Las Vegas nightclub. According to reports at the time of this incident, Griffin got upset after cameras began flashing in his face, so he grabbed the man’s phone. The case was dropped in March of last year, after prosecutors stated they couldn’t prove the allegations.

Caption: LOS ANGELES, CA – NOVEMBER 30: Blake Griffin #32 of the Los Angeles Clippers dunks past Allen Crabbe #23 and Meyers Leonard #11 of the Portland Trail Blazers during the first half at Staples Center on November 30, 2015 in Los Angeles, California.

Read more about:
Blake Griffin Los Angeles Clippers
Listen to the uInterview Podcast!
Get the most-revealing celebrity conversations with the uInterview podcast!