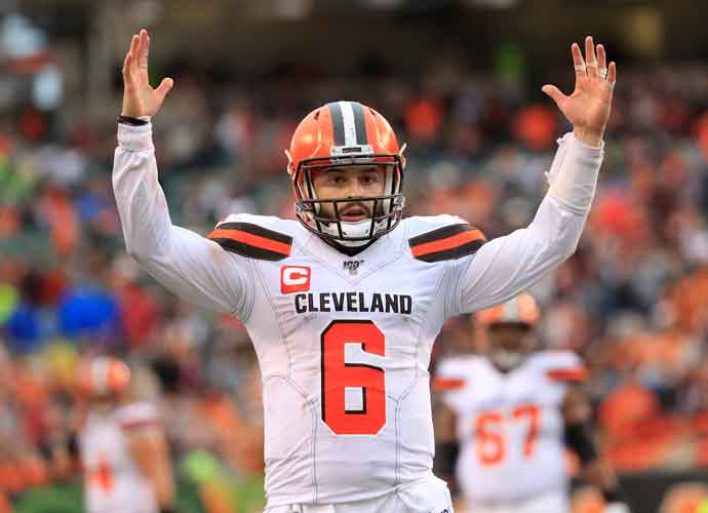 CINCINNATI, OHIO - DECEMBER 29: Baker Mayfield #6 of the Cleveland Browns celebrates after throwing a touchdown pass during the game against the Cincinnati Bengals at Paul Brown Stadium on December 29, 2019 in Cincinnati, Ohio.

Today, we will look at the Cleveland Browns. The Browns had so much hype entering the 2019 season, with Baker Mayfield entering his second season, the Browns traded for Odell Beckham Jr. to add to the core already there with Jarvis Landry, Nick Chubb and David Njoku. The Browns, unfortunately underperformed and went 6-10, missing the playoffs yet again. The Browns made moves in the offseason to get even better, signing Jack Conklin, trading for Austin Hooper, and drafting Jedrick Wills. The Browns on paper have arguably the best offense in football. The defense has some nice pieces as well with Myles Garrett (assuming he is  back for the start of the 2020 season from his suspension after he hit Mason Rudolph with a helmet), Denzel Ward, and Olivier Vernon.

Breaking down the Browns schedule, given their third place finish in the AFC North last season, they will play some of the weaker teams in their conference, at least in theory. They play eight games prior to their bye, and eight games after and given some of their opponents post their bye, it will be crucial for the Browns to start out strong against some inferior opponents, at least on paper. Prior to their bye, the Browns play teams like the Redskins, Raiders, Colts and the Bengals twice, that should be four wins right there, maybe five. The Browns will also have to go on the road to Baltimore, Dallas and Pittsburgh, all tough games, but it is definitely possible that they can win one or two of those. If the Browns can enter their bye with 5 to 7 wins, they will set themselves nicely for a run at the playoffs in the second half of the season. Looking post-bye, there are definitely games that the Browns should win, albeit they are on the road, against Jacksonville, and both the Giants and Jets. After those three games, the Browns got somewhat of a break, as they will play the Texans, Eagles, Ravens and Steelers, all at home. Barring a total collapse of the team, the Browns can win two of those four. With the NFL adding a third wild card team to each conference, the Browns have a legitimate chance of making it to the playoffs since 2002. The only thing the Browns can’t do is essentially self-destruct, there are a lot of personalities on that team in Beckham, Mayfield and Garrett, to name a few, it will be on new head coach Kevin Stefanski to limit the craziness that is the “DAWG POUND.”

The Browns should be a fun team to watch in 2020, these are the games that I would try to attend if I were you:

The thing with these games, they are all games against teams that have playoff aspirations, and being that the Browns have an eye toward the playoffs, they need to beat the best of the best teams on their schedule. Each of these games will test the Browns in different ways and given the roller coaster like nature of an NFL season, teams need to adapt on the fly and these games will force the Browns to at times maybe ditch their game plan and adapt to what is happening. Week 6 against the Steelers and Week 14 against the Ravens will be even more crucial because they are games against division foes that finished better than the Browns in the standings last season.