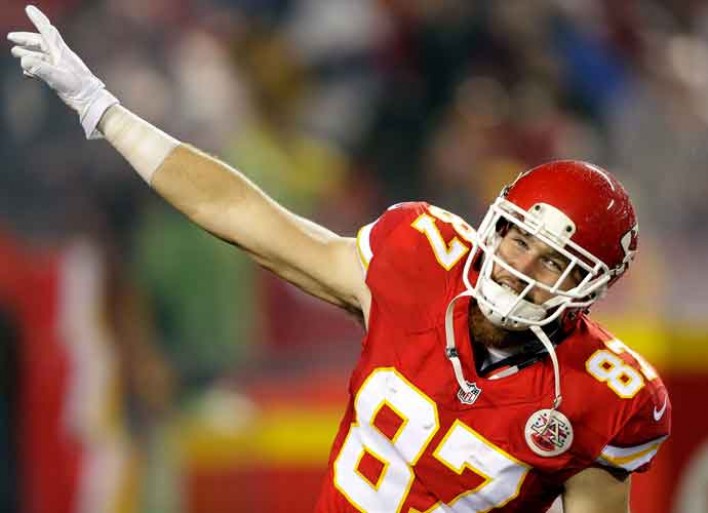 KANSAS CITY, MO - KANSAS CITY, MO - DECEMBER 25: Tight end Travis Kelce #87 of the Kansas City Chiefs enters the field during player introductions prior to the game against the Denver Broncos at Arrowhead Stadium on December 25, 2016 in Kansas City, Missouri.

On Thursday, two AFC contenders the Kansas City Chiefs and the Buffalo Bills announced contract extensions for one of their young stars – the Chiefs said that they were signing star tight-end Travis Kelce to a four-year $57 million deal, and the Bills signed cornerstone left tackle Dion Dawkins to a four-year $60 million deal.

”It’s just a blessing to be a part of it,” Dawkins said. ”McDermott, he came in here and preached to trust the process, respect the process, respect your peers, and believe in yourself. To see that the Pegulas had locked in our head spear, which is Sean McDermott, it just shows that we’re all preaching what we say. We’re just taking it one step at a time, and I’m just glad they had me in their vision and I’m just a piece to the end puzzle.”

The Bills are looking to get out under the Patriots thumb who have dominated the AFC East for the past 20-plus years who lost legendary quarterback Tom Brady to free agency this offseason. The Chiefs have already accomplished the feat by winning the AFC last season effectively ending the Patriots despite not having to play them last year. They are looking to repeat as Super Bowl champs by locking up Kelce who is a key part of their complex offensive schemes. “You don’t know where Kelce is going to be or what route he’s going to run,” Raiders coach Jon Gruden said. “Most guys have a route tree. They run a shallow cross, a deep cross, a corner route, a middle read. Kelce is running every route that a slot receiver or a big-time wide receiver runs. They’re asking Kelce to do some things that are very, very difficult, and he pulls it off. It’s maddening to not only our team but, I think, any team that plays the Chiefs.”

It’s not unrealistic that if these teams are able to maintain their cores while constantly bringing in young talent to grow with them that they will be jockeying for the top spot in the AFC for many years to come and by locking up these young cornerstones, they are putting themselves in a good position to do so. ”Never get comfortable with the cushion,” Dawkins said. ”It just means that it’s time to go earn it. It’s definitely time to go out there and earn every penny of it and just to believe in yourself and to continue to take it one day at a time.”