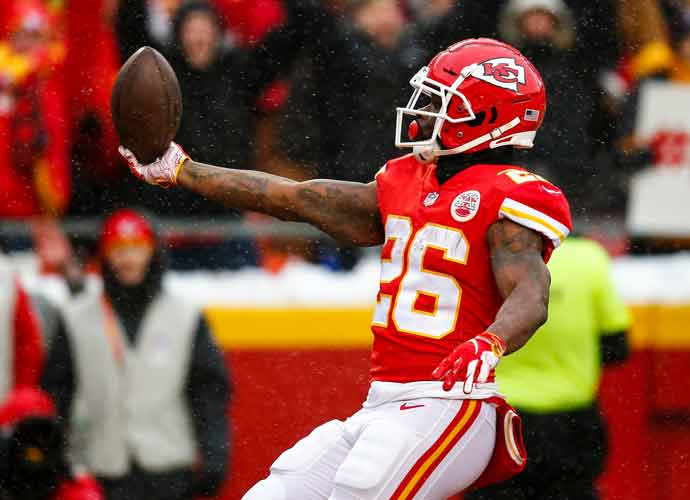 KANSAS CITY, MO - JANUARY 12: Damien Williams #26 of the Kansas City Chiefs presents the ball to the crowd after scoring the game's first touchdown during the first quarter of the game against the Indianapolis Colts during the AFC Divisional Round playoff game at Arrowhead Stadium on January 12, 2019 in Kansas City, Missouri.

The Kansas City Chiefs, who will look to defend their Super Bowl this upcoming season, will now be without two offensive starters in their repeat campaign. Starting RB Damien Williams announced on Wednesday that he would be sitting out of the 2020 NFL season. “As an organization, we certainly understand and respect Damien’s choice, knowing it was made in the best interest of his family,” general manager Brett Veach said in a statement. “He means a lot to our football team as a player and a person, and we’re going to miss having him around this season.” Williams joins right guard Laurent Duvernay-Tardif as the two players who have opted out fro the Chiefs so far.

While this may not be a huge blow to the Chiefs considering the replaceability of running backs, there are still several months before the season will start and nobody knows how many players will end up opting out. It is unclear at this time whether Williams is at high risk or not. If he is deemed high risk then he will receive a salary of $350,000 and if not that will drop to $150,000. Williams, as is the case with many starting running backs, was expected to be a highly sought after fantasy football player.

The Chiefs are lucky to have the great equalizer in star quarterback Patrick Mahomes but even with his great talent, it is tough for a quarterback to operate at the highest level if their line is decimated and they have fewer weapons.