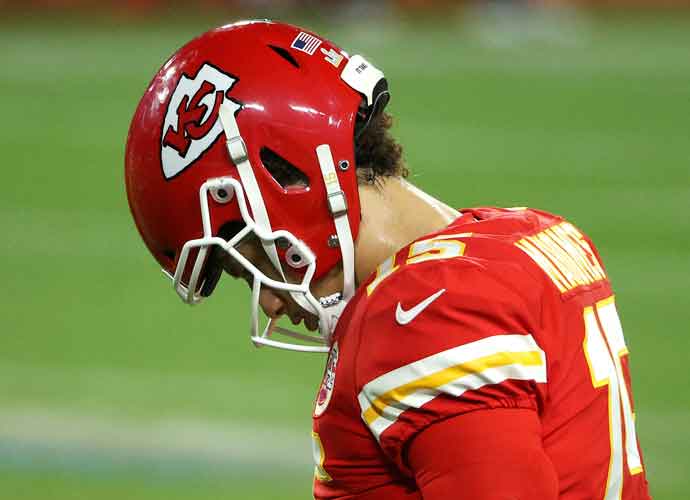 TAMPA, FLORIDA - FEBRUARY 07: Patrick Mahomes #15 of the Kansas City Chiefs walks with his head down in the fourth quarter against the Tampa Bay Buccaneers in Super Bowl LV at Raymond James Stadium on February 07, 2021 in Tampa, Florida. (Photo by Patrick Smith/Getty Images)

The MVP quarterback Patrick Mahomes had an amazing game on Sunday, taking the Kansas City Chiefs to the lead in the AFC West division standings.

Mahomes threw for a season-high 406 yards and tossed five touchdowns to beat the Las Vegas Raiders, completing 35 of 50 passes on Sunday at Allegiant Stadium in Paradise, Nevada. The Chiefs then continued their win streak making it three-consecutive games.

“I think the whole team kinda got that swagger back,” Mahomes stated. “We are going to try to keep this thing rolling.”

The Chiefs beat the Raiders 516 to 299 in total yards and held an edge in time of possession of nearly 11 minutes.

Mahomes threw three of his five touchdown tosses in the second half and connected with Tyreek Hill for an eight-yard touchdown with 2:51 remaining in the first quarter to give the Chiefs an early lead. Chiefs kicker Harrison Butker made a 40-yard field goal 8:24 before halftime. Mahomes then connected with Hill for a second score about seven minutes later. That 1-yard connection gave the Chiefs a 17-7 lead at halftime.

Mahomes then orchestrated a 13-play, 82-yard touchdown drive to spark a run of 24 unanswered points. He ended that possession with a 1one-yard touchdown toss to Noah Gray. Chiefs safety Daniel Sorensen intercepted Derek Carr, the Raiders quarterback, on the Raiders next drive. Mahomes followed with a 38-yard touchdown pass to running back Darrel Williams 1:49 into the fourth.

“In this league, you are just as good as your next game,” Chiefs coach Andy Reid said. “We are seeing it every game. … The parity in this league is ridiculous. You have to stay on your game and continue to work to get better.”

“I just really believe in our group. It’s a close group,” Carr said of the Raiders. “The things we messed up are so correctable. That’s what gives me confidence that we can do it.”

Carr completed 25 of 35 passes for 261 yards, one score and an interception in the loss.