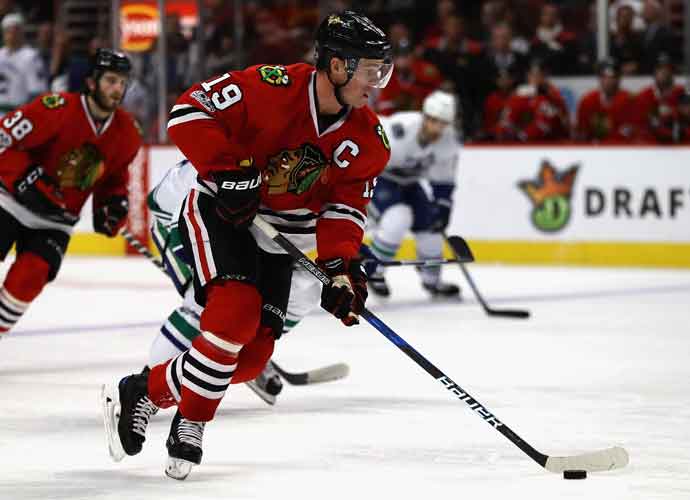 Jonathan Toews #19 of the Chicago Blackhawks

The Boston Bruins lost only their third game of the season Thursday after being edged out by the Central Division’s last place Chicago Blackhawks, 4-3 in overtime. After blowing a three goal lead in the third period, Jonathan Toews scored the game-winning goal a minute into overtime.

Ryan Carpenter started off the scoring for the Blackhawks with a short-handed goal in the first period. Dylan Strome followed up with a goal 40 seconds later after he redirected a shot from Erik Gustafsson.

Alex DeBrincat really needed to get going after not scoring for Chicago in the last 12 games. The 21-year-old American is coming off a season where he netted 41 goals with 76 total points. He finally answered the bell blasting a wrist shot stick side past Rask on a breakaway in the third period.

“It was a long time between goals. But hopefully I can get hot again and keep going,” DeBrincat said.

Boston surged back with third period goals coming from Joakim Nordstrom and Chris Wagner, before Torrey Krug tied the game at 3-3 with two and a half minutes remaining.

After stripping the puck from Bruins’ star David Pastrnak, Toews and Blackhawks’ right wing Patrick Kane ,skated down the ice with a two on none breakaway. Toews was able to deke out Bruins’ goalie Tuukka Rask and score on the backhand in front of a hostile TD Garden crowd in Boston. This is definitely an upset considering Boston is first in the Atlantic Division with 45 points (20-3-6) and 15 points clear of the second place Florida Panthers.

“We had a little run there after we had a big win in Nashville. Whether we win a string of games together, we can build off games like this. We had the start we needed tonight and carried it through 60 (minutes) for the most part. It’s got to be a confidence builder when you beat a team like Boston in their own building, but what matters is what we do next. And we got another chance to build off it (Friday) night,” Toews told the Chicago Tribune.

The Blackhawks were short-handed missing their top two defensemen Olli Maatta and Duncan Keith, but were still able to hold off a high scoring Bruins team until the third period. Maatta had been ruled out due to flu-like symptoms and Keith has now missed the last two games with a groin injury he suffered in a November 29 loss against Colorado. Dennis Gilbert filled in nicely in their absence blocking two shots and played well overall.

“Obviously, we’re missing a couple pretty important guys, but we had some really good performances. I thought Gilbert was really good to step right in and play some minutes for us. That’s what you need in those situations,” said Hawks Head Coach Jeremy Colliton.

Chicago was able to stop all four of Boston’s powerplays. That is a surprise considering the Bruins rank third in the league with 25 power play goals.

The Hawks hope to build on the win when they take on the Devils Friday.