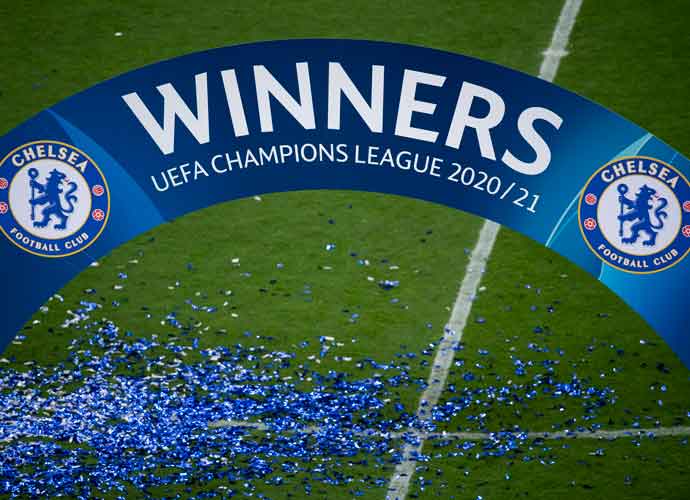 PORTO, PORTUGAL - MAY 29: The winners podium after the UEFA Champions League Final between Manchester City and Chelsea FC at Estadio do Dragao on May 29, 2021 in Porto, Portugal. (Photo by Visionhaus/Getty Images)

For the first time since 2012, Chelsea will hoist the trophy as winners of the Champions League.

The team defeated Manchester City by a score of 1-0 on Saturday, marking their third victory over Man City this year. The team was led by a new coach, Thomas Tuchel, who took over the position of manager in January, beginning his tenure with a 14-game winning streak. Tuchel had previously been the manager of Paris Saint-Germain, where he finished runner-up in the 2019-2020 Champions League.

The decisive goal in the match was scored by Kai Havertz in the 42nd minute, his first ever goal in the Champions League. Chelsea signed Havertz from Bayer Leverkusen last summer for £88 million. On the flip side, the most dominant offense in the premier league, Man City, was befuddled by Chelsea’s defensive strategies, getting only one shot on goal the entire match. City manager Pep Guardiola chose a more attack-heavy starting 11, benching some of his defensive midfielders at the beginning of the match.

Also of note in the match was the presence of Christian Pulisic on Chelsea, who entered the game in the second half as a sub. Pulisic became only the the second male U.S. international, after Borussia Dortmund forward Jovan Kirovski in 1997, to be on a team that won the Champions League. This marks Chelsea’s second ever Champions League trophy, which required defeated both perennial contender Real Madrid in the semifinals as well as defending Premier League champions Manchester City in the title match.