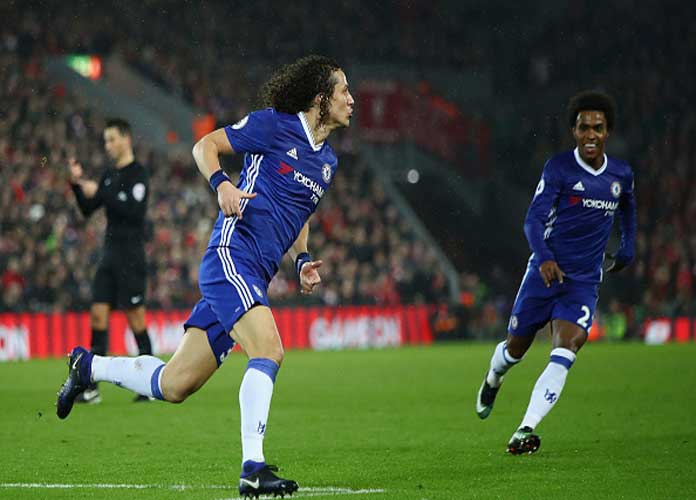 LIVERPOOL, ENGLAND - JANUARY 31: David Luiz of Chelsea celebrates scoring the opening goal during the Premier League match between Liverpool and Chelsea at Anfield on January 31, 2017 in Liverpool, England. (Photo by Clive Mason/Getty Images)

Despite winning this season’s Europa League trophy and finishing third in the domestic league, Chelsea Football Club seem to be in absolute turmoil. Star player Eden Hazard will be moving to Spanish powerhouse Real Madrid for over $88 million after hinting at a move for over a full season. Head coach Maurizio Sarri will likely be leaving the club to return to Italy to be the manager of Juventus after multiple disagreements with the players and staff just one year under his tenure. And FIFA has filed for a two window transfer ban that if they are successfully found guilty, won’t be able to sign any new players for the remaining future.

FIFA gave the punishment to Chelsea back in February after the club allegedly had violated transfer rules, signing 29 players that were under the age of 18. After the statement was released, Chelsea immediately appealed the charge, and still await the final verdict.

Before the appeal however, Chelsea were able to sign U.S. international Christian Pulisic just before in January, and loaned Pulisic back to Borussia Dortmund for the remainder of the season, after confirming that he would be leaving German side.

According to the Guardian, FIFA has rejected Chelsea’s appeal against the sanction and the ban hasn’t been frozen as of yet. The Court of Arbitration said, “it is not possible to say at this time” when a decision will be decided.

If FIFA were to successfully ban Chelsea for two transfer windows, they will likely be looking at a tough season ahead of them. The squad depth and overall motivation to the club would fall, and some players will likely leave along with Hazard. According to Talk Sport, Chelsea has recently offered extension deals to veterans David Luiz and Olivier Giroud as it is a clear indication Chelsea will not be making any additions to the squad this summer.