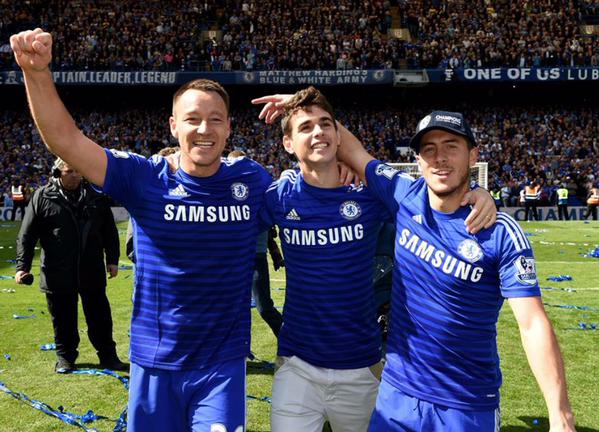 Chelsea clinched the 2015 Barclays Premier League title on Sunday with a 1-0 victory over Crystal Palace in front of their home supporters at Stamford Bridge. The title is Chelsea’s fifth in England’s top division and their fourth since the formation of the Premier League in 1992.

Eden Hazard’s 45th minute goal to end the 1st half was all Chelsea needed in a scrappy London derby to seal the championship. Manager Jose Mourinho’s typical defensive strategy paid off once again for “The Blues,” as they dug deep and fought off any challenges coming their way from Crystal Palace. Stamford Bridge erupted in joy after the final whistle as Chelsea celebrated winning the Premier League title with three matches still to go.

Manchester City grabbed all three points against Tottenham Hotspur later on in the day, but will be unable to catch Chelsea in the table– City have 70 points to Chelsea’s 83. Arsenal and Manchester United currently sit in third and fourth for UEFA Champions League spots, with only Liverpool having a realistic shot of crashing the top four.

The final weekends of the Premier League will be focused on the relegation battle, as the bottom three teams in the league get sent down to the Sky Bet Championship, England’s second tier league. Burnley currently sits at the bottom with 26 points and three games to go, while Queens Park Rangers is just one point above them in 19th. The safety spot of 17th will be greatly contested, as 14th place Aston Villa and 18th place Sunderland are only separated by two points, with Newcastle, Hull City, and Leicester City all sitting between them. Hull City will face off against Arsenal on Monday in a critical match for their survival.