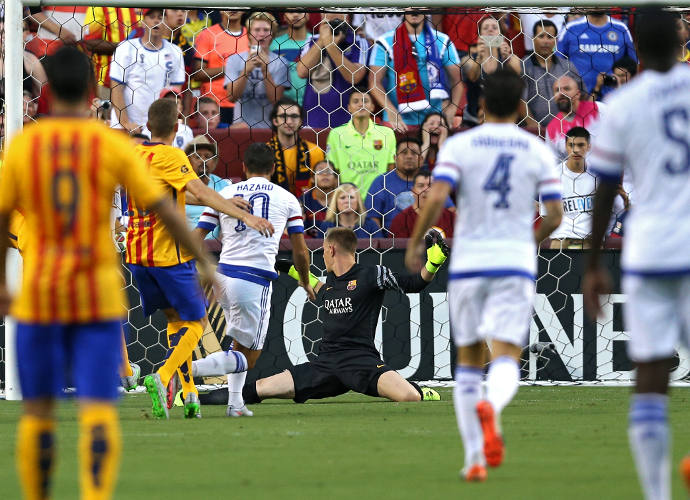 Perhaps it was the rather embarrassing loss last week to the Red Bulls that motivated a 2-2 (4-2 penalty) Chelsea win over Barcelona.  Chelsea attacking midfielder and winger, Eden Hazard led the team in the first half with an amazing clinical goal as the two teams played in an International Champions Cup friendly at the FedEx Field in Landover, Md.  His goal had him dribbling the ball past four defenders which ended with a climactic bullet shot past the Barcelona goalie.

It seems fitting that he scores like this as Chelsea manager, Jose Mourinho, last year said that Hazard was better than Cristiano Ronaldo.

But as a friendly, this was a fun game to watch, and play in (personally didn’t play, but the players seemed to have fun.) After Hazard’s goal, Barcelona striker Luis Suarez shot back with a goal of his own at 52 minutes which was followed by forward, Sandro Ramirez, at 66 minutes to grab the lead. Chelsea centerback Gary Cahill was then able to equalize the score five minutes before the end of regulation. The proceeding spot kicks were a success for the Blue Lions as Radamel Falcao, Vitor Moses, Ramires Santos do Nascimento, and Loic Remy all scored while Barca’s Gerald Pique and Alen Halilovic ended up missing their shots.

This gives Chelsea a psychological boost as they head into the season, but the main thing is that everyone respected the other, no?