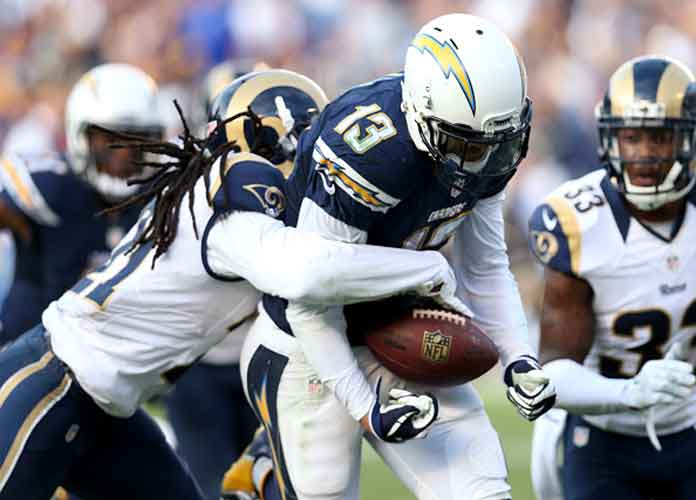 SAN DIEGO, CA - NOVEMBER 23: Wide receiver Keenan Allen #13 of the San Diego Chargers is striped of the ball by defensive back Janoris Jenkins #21 of the St. Louis Rams to force a turnover i the third quarter at Qualcomm Stadium on November 23, 2014 in San Diego, California. The Chargers won 27-24.

Before he exited the game, Allen was having an excellent start to his 2022 season, catching four passes for 66 yards in less than one half. His departure didn’t prove too costly for Los Angeles, which went on to win 24-19. If he misses more time, however, his absence could become more apparent.

As young quarterback Justin Herbert’s favorite target, Allen has given the Chargers’ offense stability when he has appeared on the field. Though Herbert has performed well without Allen in the past, he also depends on him heavily when he’s available, targeting him at least eight times in all but two games last season.

In Allen’s absence Week 1, veteran receiver DeAndre Carter filled in and had a productive day, catching three passes for 64 yards and a touchdown. Receiver Joshua Palmer is also expected to have an increased role in the offense without Allen.

This is not the best week for Los Angeles to compete with a depleted roster, as they will have to take on their division rivals, the Kansas City Chiefs, on primetime television. In Week 1, the Chiefs’ offense was outstanding, as quarterback Patrick Mahomes threw for 360 yards and five touchdowns in a 44-21 rout against the Arizona Cardinals.

Herbert will have to out-duel Mahomes Thursday night with Mike Williams and a handful of backups. Kansas City’s defense didn’t disappoint last weekend either, as the team held quarterback Kyler Murray and the Cardinals to seven points through three quarters. It’s safe to say that Allen will be missed regardless of the result.