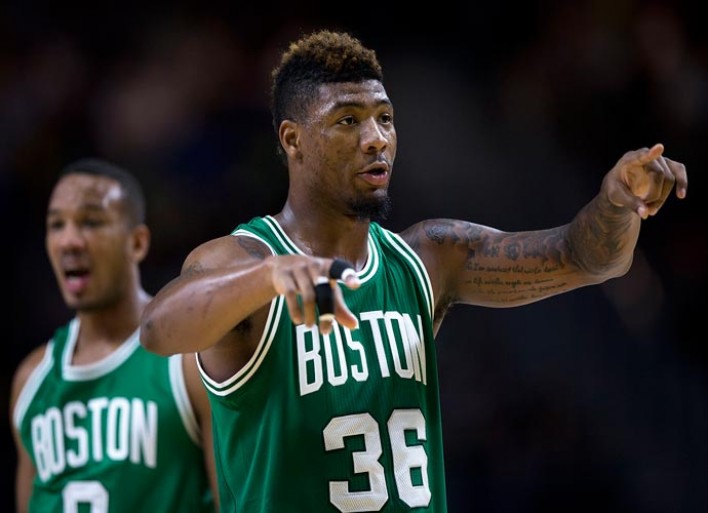 MADRID, SPAIN - OCTOBER 08: Marcus Smart of Boston Celtics gives instructions to his teammates during the friendlies of the NBA Global Games 2015 basketball match between Real Madrid and Boston Celtics at Barclaycard Center on October 8, 2015 in Madrid, Spain.

As the spread of coronavirus (COVID-19) continues to ramp up throughout the country, the NBA has reported three more cases including Celtics‘ guard Marcus Smart and two unnamed Lakers’ players. The Celtics’ statement released on Thursday did not identify Smart by name, but the report was later confirmed by the 26-year-old who posted a video describing his situation on Twitter.

I’ve had no symptoms and I feel great. But the younger generation in our country MUST self distance. This is not a joke. Not doing so is selfish. Together we can beat this, but we must beat it together by being apart for a short while. Much love!!

“The Boston Celtics learned today that a player has tested positive for COVID-19. Testing was initiated because of exposure to a known positive case,” the team’s statement read. “The Celtics player, who is not exhibiting symptoms, has been in isolation for several days and will continue to do so while being monitored by team medical staff. The team is awaiting further testing results and will communicate them as appropriate. Taking steps to maintain the health and safety of everyone in our organization and across the NBA remains our top priority, and we will continue to work closely with health officials and the league in addressing this situation.”

Smart revealed that he was tested five days ago and received his results on Thursday night, according to ESPN.

Lakers’ players were tested Wednesday and were notified of the two positive cases the next day. The team was required to undergo testing after their last opponent, the Brooklyn Nets, reported four players infected including star-player Kevin Durant. Their last match-up was on March 10.

“We learned today that two Lakers players have tested positive. Both players are currently asymptomatic, in quarantine and under the care of the team’s physician,” the Lakers said in a statement. “All players and members of the Lakers staff are being asked to continue to observe self-quarantine and shelter at home guidelines, closely monitor their health, consult with their personal physicians and maintain constant communication with the team.”

Fourteen Lakers’ players drove to a testing site and remained in their vehicles as trained professionals gave them a nostril swab to test for the virus, according to ESPN’s Ramona Shelburne.

“The health and well-being of our players, our organization, our fans, and all those potentially impacted by this situation is paramount. As always, we appreciate the support of our fans, family and friends, and wish everyone affected by this virus a speedy recovery,” the Lakers’ statement said.