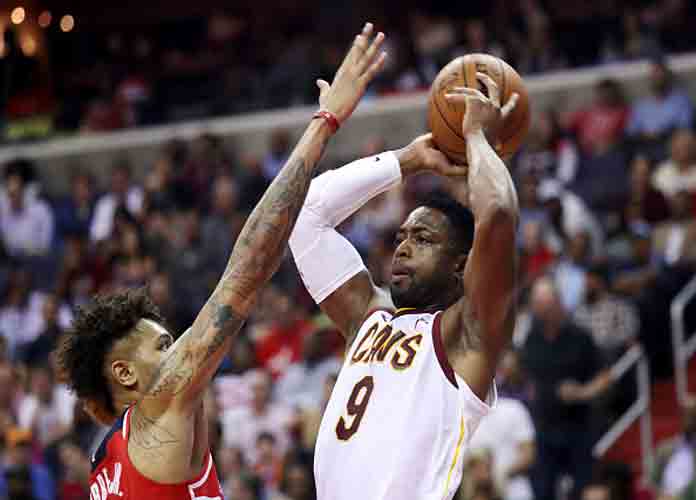 Dwyane Wade has officially returned to Miami after being traded by the Cleveland Cavaliers on Thursday, and the announcement had a major effect on the Heat’s merchandise sales.

The 36-year-old guard rejoined the team he left less than two years ago in a deal that saw the Cavs get a protected 2024 second-round pick. Wade played his first 13 NBA seasons with the Heat.

“We feel that Dwyane can help our team in so many ways,” said Heat President Pat Riley. “It is a beautiful moment for us, for the city and for the fans. All of us embrace it in the manner that we want to win and that’s why we brought Dwyane back home. We look forward to having a great end of season run as we fight for the playoffs.”

Wade clearly seemed happy about his return to Miami, as did his wife, actress Gabrielle Union:

D-Wade is happy to be back 😁 (via @DwyaneWade) pic.twitter.com/MmFYj9yOOc

The veteran player’s return to Miami also had a jaw-dropping effect on the Heat’s merchandise sales. Following the announcement, ESPN’s Darren Rovell reported that after the new Wade jerseys went on sale at 5pm on Thursday, orders from more than 100 countries flooded the site in 15 hours. Even more amazingly, merchandise sales increased 8000 percent relative to the previous two days. Yes, not 8 or 80 percent — 8,000.

Heat put @DwyaneWade jerseys on sale at 5pm yesterday. Received orders from more than 100 countries in 15 hours. Team merchandise sales are up 8000% from the previous two days. pic.twitter.com/nD3Gt0v2Ai

Wade reportedly found out rather late that he was being traded.

This season, Wade has been averaging a career-low 11.2 points and playing about 23 minutes per game, so maybe he will click more with his former squad.

WASHINGTON, DC – NOVEMBER 3: Dwyane Wade #9 of the Cleveland Cavaliers passes around Kelly Oubre Jr. #12 of the Washington Wizards in the first half at Capital One Arena on November 3, 2017 in Washington, DC. NOTE TO USER: User expressly acknowledges and agrees that, by downloading and or using this photograph, User is consenting to the terms and conditions of the Getty Images License Agreement. (Photo by Rob Carr/Getty Images)